Under the Chief of Staff are the Office of Community Relations and five divisions: Communications; Intergovernmental Affairs; Policy, Planning, and Public Affairs; Stakeholder Engagement; and Strategic Partnerships.

The Local Development Council advises the County on the impact of the video lottery facility on the communities in immediate proximity to the facility, and on the needs and priorities of those communities. The Council also makes recommendations to the County regarding multi-year plans for expenditure of revenue from the facility.

POLICY, PLANNING & PUBLIC AFFAIRS DIVISION
The Policy, Planning and Public Affairs Division was initiated by the County Executive in June 2019.

STAKEHOLDER ENGAGEMENT & AFFAIRS DIVISION
In December 2018, the Stakeholder Engagement and Affairs Division was created under the County Executive.

STRATEGIC PARTNERSHIP DIVISION
The Strategic Partnership Division was formed under the County Executive in December 2018. 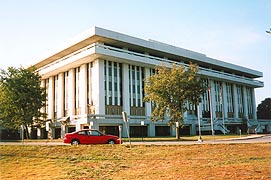 Reporting directly to the Chief Administrative Officer are four offices: Ethics and Accountability, Finance, Law, and Management and Budget. 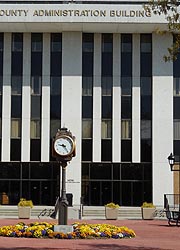 OFFICE OF CENTRAL SERVICES
Procuring and managing facilities and contracts, the Office of Central Services secures administrative and construction services to meet the needs of County government. The Office oversees the County's real estate, and fleet management.

OFFICE OF ETHICS & ACCOUNTABILITY
The Office of Ethics and Accountability was created in 2012 (County Code, secs. 2-298 through 2-309).

BOARD OF ETHICS
Advising County officers and employees on matters related to State and County ethics laws, the Board of Ethics investigates and rules on complaints of violations. The Board also provides and retains disclosure forms for those subject to County ethics laws (Code State Government Chapter, secs. 15-801 through 15-808).

Serving three-year terms, members of the Board are appointed by the County Executive with County Council consent.

OFFICE OF FINANCE
Overseeing County fiscal assets, the Office of Finance is responsible for the collection and disbursement of all State and County tax revenue. Financial records for County government agencies are maintained by the Office, which reports on financial matters to the County Executive and County Council (County Charter, Art. VIII, secs. 801 through 824; County Code, secs. 10-101 through 10-290).

OFFICE OF HUMAN RESOURCES MANAGEMENT
The Office of Human Resources Management oversees the hiring practices of County government agencies, seeing that State and County employment practice laws are enforced. The Office posts position openings, oversees orientation and training, negotiates on behalf of the County in collective bargaining, sets County contract wage requirements, and manages benefits and pensions. In addition, the Office serves as mediator in employee disputes. If mediation breaks down, and does not involve collective bargaining, cases may be appealed to the Personnel Board (County Charter, Art. IX, secs. 901 through 909, Art. X, sec. 1009).

PERSONNEL BOARD
Advising the County Council on matters of employment policy and law, the Personnel Board also advises County government supervisors in the execution of current personnel requirments and guidelines. The Board hears appeals of employee disputes not covered by collective bargaining. In cases where the Board's ruling is disputed, cases may be appealed to the Circuit Court.

CABLE TELEVISION COMMISSION
In 1999, the Cable Television Commission was formed.

The Commission invites, receives, reviews, and evaluates applications for cable franchises, and, after public hearings about them, recommends to the County Council those franchises which will best serve County residents. The Commission also is charged to regulate rates; audit franchise records; and resolve disagreements among franchisees, subscribers, and public and private users of system facilities.

OFFICE OF MANAGEMENT & BUDGET
The annual budget for County government is created by the Office of Management and Budget with the County Executive. On current government methods and procedures, the Office provides to the County Executive estimates of future County income and expenses, and advises on issues of policy and legislation. To set fiscal guidelines for County agencies, the Office also analyzes County revenues and expenditures (County Charter, Art. VIII, sec. 802).

REVENUE AUTHORITY
The Revenue Authority of Prince George's County was established in 1997 in accordance with Chapter 491, Acts of 1996. The Authority is authorized to construct, reconstruct, remodel, renovate, improve, equip, furnish, maintain, acquire, operate, control, regulate, and finance or refinance projects within the County devoted wholly or partially for public uses, goods, or general welfare (County Code, secs. 21A-103, 21A-113).