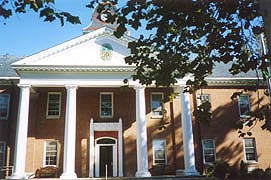 Duties of the County Commissioners in Caroline County stemmed originally from the County Court. The earliest courts served executive and judicial functions. They mainly were concerned with the levying of taxes; the maintenance of ferries, bridges, roads, tobacco warehouses, inns, and county buildings; the care of orphans, paupers, and infirm slaves; and the appointment of county officials. Additionally, these courts conducted judicial functions, holding misdemeanor and felony hearings.

For Caroline County, in 1774, colonial Governor Robert Eden appointed nine justices to the County Court. It was unusual, however, for as many as seven to be in attendance on any particular day.

As the American Revolution got underway, the justices met temporarily in inns, warehouses, and homes. Not until 1790 was the first County Courthouse built at Denton.

In 1794, the Levy Court replaced the County Court and was concerned with levying and collecting of taxes. The Constitution of 1851, in turn, replaced the Levy Court with County Commissioners (Constitution of 1851, Art. VII, sec. 8). Three commissioners were elected to two-, four-, and six-year terms, respectively (Chapter 372, Laws of 1852). By 1922, all county commissioners were given four-years terms (Chapter 227, Acts of 1922).

Today, the Board of County Commissioners serves as both the executive branch and legislative branch of County government. The Board enacts County laws and policies, levies taxes, ascertains how County funds are used, and promotes the welfare of the County.

The Board's three members are elected by the voters to four-year terms. Annually, the Board selects the Chair and Vice-Chair.

The Police Accountability Board receives complaints of police misconduct filed by members of the public. On a quarterly basis, the Board meets with heads of law enforcement agencies and works with those agencies and County government to improve County policing.

ADMINISTRATIVE CHARGING COMMITTEE
In June 2022, the Administrative Charging Committee was formed by the Board of County Commissioners (Resolution no. 2022-10).

Five members constitute the Committee. Two are appointed to four-year terms by the Board of County Commissioners, and two by the Police Accountability Board. One member serves ex officio. Annually, the Chair is chosen by the Committee (Code Public Safety Article, secs. 3-102 through 3-104).