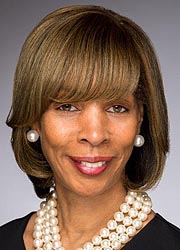 On November 21, 2019, Ms. Pugh pleaded guilty in U.S. District Court to charges of conspiracy to commit wire fraud, conspiracy to defraud the United States, and tax-evasion. On February 27, 2020, she was sentenced to three years in federal prison, followed by three years probation. She also was ordered to pay $411,948 in restitution and forfeit more than $600,000. Ms. Pugh was scheduled to begin serving her sentence on June 26, 2020.

On June 19, 2020, Ms. Pugh pleaded guilty in Anne Arundel County Circuit Court to a charge of perjury, stemming from the sale of her self-published “Healthy Holly” children’s book while she served as a State Senator. She was sentenced to six-months in jail, the term to run concurrently with the earlier sentence she received from the U.S. District Court.

On June 26, 2020, Ms. Pugh began serving her concurrent sentences at the Federal Correctional Institution, Aliceville, Alabama, a low security facility. By January 2022, she was transferred to the Baltimore Field Office of Residential Re-entry Management, which manages offenders living in halfway houses and serving in home confinement.