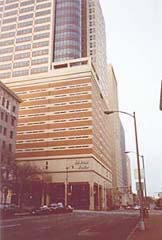 In 1991, the State Open Meetings Law Compliance Board was authorized by the General Assembly (Chapter 655, Acts of 1991).

The Board receives, reviews, and resolves complaints alleging a violation of Maryland's Open Meetings Law and issues a written opinion on whether or not a violation has occurred. The Board also evaluates how well public bodies comply with the Open Meetings Law and recommends improvements in the law to the General Assembly. With the Office of the Attorney General and interested organizations or persons, the Board additionally develops and conducts educational programs, and distributes educational materials on the requirements of the Open Meetings Law for the staffs and attorneys of public bodies, the Maryland Association of Counties, the Maryland Association of Boards of Education, and the Maryland Municipal League.

Appointed by the Governor with Senate consent, the Board consists of three members who serve three-year terms. The Governor designates the chair. The Attorney General's Office provides staff for the Board (Code General Provisions Article, secs. 3-201 through 3-213).