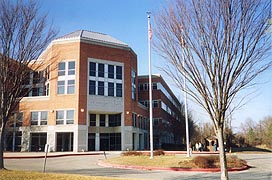 In March 2002, the Governor established the Commission on Crossroads Development. The crossroads region spans three jurisdictions: Montgomery County, Prince George's County, and the City of Takoma Park. It includes areas encompassing and expanding outward from the intersection of University Boulevard and New Hampshire Avenue.

In 2001, the Crossroads Task Force had begun to address issues, such as day labor, public safety, and transportation, which affect the region's quality of life. The Task Force drew up a Memorandum of Understanding (to be signed by the three jurisdictions and the State of Maryland) which created the Commission on Crossroads Development. The Commission was to continue the Task Force's work of facilitating multi-jurisdictional communication and cooperation. Its agenda included: day labor; transit; public safety; education and training; and immigrant communities.

Although the Site Selection Team did meet, the Commission's members were not appointed until 2006.

A critical need identified by the Crossroads Task Force was a place in the community for day laborers to gather and be hired for short-term work that did not interfere with local businesses. Since the existing day-labor sites all were found to have shortcomings, a Site Selection Team formed in March 2002 to consider specific locations for a new day-labor employment facility. The Team's members included two representatives of State government, two from Montgomery County, and two from Prince George's County.