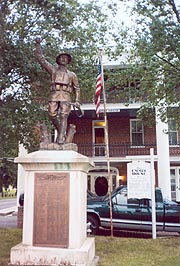 Several sites in Maryland were significant to World War I. Fort Meade operated as a training site for 400,000 soldiers. Aberdeen Proving Ground, the oldest proving ground in the country, tested weaponry and munitions. Fort McHenry was the largest receiving hospital in the country during the War, and cared for over 20,000 wounded returning to the United States.

To recognize the 100th anniversary of World War I, the event of 1914 through 1918, and the role of Marylanders in the War, the Maryland World War I Centennial Commission planned activities for Maryland residents and visitors. The Commission encouraged State and local government agencies, and private organizations to organize and participate in centennial events. It also assisted with efforts to protect, improve, and develop educational and interpretive institutions, sites, and museums related to World War I.

By June 30, 2017, the Commission was to present an action plan to the Governor.

Authorization for the Commission ended on November 11, 2019.