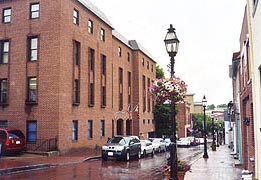 The Commission on the Establishment of a Maryland Women in Military Service Monument originally was authorized in July 2006, and appointed in July 2007 (Chapters 281& 282, Acts of 2006). The Commission was to identify and recommend the funding, design, construction, and placement of a monument dedicated to women from Maryland who served in the uniformed forces of the United States. Authorization for the Commission expired September 30, 2007; however, an extension was authorized to March 3, 2008. The Commission submitted its interim report on December 31, 2007, and its final report on March 3, 2008.

The monument to honor Maryland women in military service at the Chesapeake Travel Plaza on Interstate 95 near North East, Maryland, was dedicated on November 11, 2014.

Authorization for the Commission ended September 30, 2014.