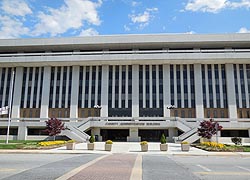 In June 2018, the Task Force on the Use of Master Meters for Utility Services in Prince George's County was authorized by the General Assembly (Chapter 128, Acts of 2018).

The Task Force studied issues concerning the use of master meters in multiple-occupancy residential buildings constructed as or converted to condominiums or cooperative ownerships in Prince George's County. Further, the Task Force studied and made recommendations on what money is owed for utility services by unit owners in such residential buildings.

In December 2019, the Task Force submitted its report to the Governor and the County Delegation.