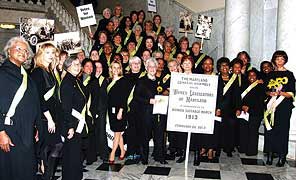 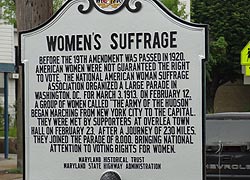 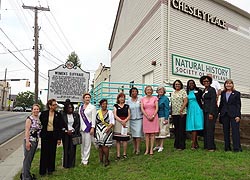 In July 2013, the Commission on the Commemoration of the 100th Anniversary of the Passage of the 19th Amendment to the United States Constitution was authorized by the General Assembly (Chapter 603, Acts of 2013; Code State Government Article, sec. 9-3001). Ratified by two-thirds of the states in August 1920, the 19th Amendment gave women the right to vote in the United States.

The Commission developed a plan for commemorating the events that occurred in Maryland connected to women's suffrage and the ratification of the Nineteenth Amendment to the U.S. Constitution. It also assembled an inventory of sites in Maryland that are significant to the suffrage movement, and developed a strategy to encourage tourism related to the commemoration.

Despite a strong suffrage movement in the State, Maryland initially rejected the 19th Amendment on March 26, 1920 (Joint Resolution no. 2, Acts of 1920). By May 29, 1941, however, the General Assembly chose to ratify it (Joint Resolution no. 12, Acts of 1941). Further, with regard to the Maryland Constitution, the General Assembly in 1956 voted to amend the document to expand the franchise so that it would not be limited to those described as "white male" (Chapter 99, Acts of 1956, ratified by the voters, November 6, 1956).