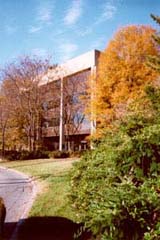 The Commission worked with State agencies, local governments, land trusts, and citizens to form a system of interconnecting recreational trails and wildlife corridors that link protective buffers along Maryland's waterways. These greenways - corridors of open space that follow streams, ridgetops, rivers, or other linear features - can be used for recreation and conservation. They may be publicly owned for recreation and parks, or privately owned as wildlife habitat or to enhance water quality.

A network of greenways in both urban and rural areas throughout the State was planned by the Commission. Included were the Chesapeake and Ohio (C & O) Canal, the Appalachian Trail, Patapsco Valley State Park, and the lower Pocomoke River greenways. Trail systems like the Northern Central Railroad Trail and Anne Arundel County's Baltimore and Annapolis (B & A) Trail are recreational greenway connectors. To create interstate greenway connections, the Commission also cooperated with neighboring states. In addition, the Commission became involved with regional greenways, including the Lower Susquehanna Heritage Greenway, Patapsco Valley Greenway, and the Potomac River Greenway.

Meeting quarterly, the Commission was aided by a liaison from each county and Baltimore City.