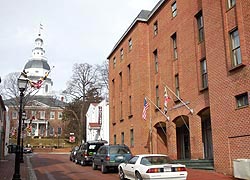 In July 2016, the Task Force to Study Recording Deeds for Victims of Domestic Violence was formed (Chapter 602, Acts of 2016).

The Task Force studied and made recommendations on how to protect the identity and address of a participant in the Address Confidentiality Program when recording a deed that transfers real property to or from a Program participant. The Office of Secretary of State administers the Maryland Safe at Home Address Confidentiality Program for victims of domestic violence or human trafficking to keep their location confidential from perpetrators seeking to find them. Currently, that program has special procedures for victims when interacting with the Motor Vehicle Administration, the State Board of Elections, or any public school. However, the address of a victim is still at risk of discovery on a deed, which is a public record.

In December 2017, the Task Force submitted its final report to the Governor and General Assembly.