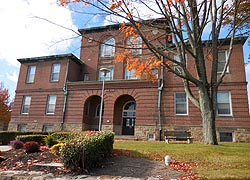 In 1898, Frostburg State University was founded as Maryland Normal School no. 2 under the State Board of Education. "Normal" came from the French ecole normale, and the Prussian normal schools that influenced American educators to establish norms or standards for the training of teachers. The School first opened in 1902, offering a two-year program to train elementary school teachers. In 1931, teacher training expanded to a three-year program, and in 1934 to four-years.

In 1935, Maryland Normal School no. 2 was renamed State Teachers College at Frostburg. By 1946, the College offered a liberal arts junior college program until 1960 when the College was authorized to confer the bachelor of arts degee and the master's degree in education. Thereafter, it became Frostburg State College in July 1963 and was placed under the Board of Trustees of State Colleges (Chapter 41, Acts of 1963). On July 7, 1987, the College became Frostburg State University. The University was made part of the University of Maryland System in 1988 (Chapter 246, Acts of 1988). The System was renamed University System of Maryland in 1997 (Chapter 114, Acts of 1997).

Frostburg offers undergraduate and graduate programs of study with an emphasis on arts, humanities, business, applied technologies, education, environmental sciences, human services, and social and behavioral sciences. Accredited by the Middle States Association of Colleges and Schools, it serves as a regional State university for Western Maryland. The University serves the educational needs of Western Maryland and plays a major role in its economic development. As the premier cultural center for Allegany and Garrett counties, the University attracts thousands of area residents and tourists to programs in its Performing Arts Center. 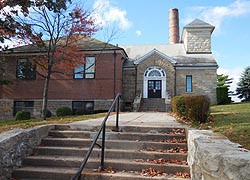 The College of Business started as the School of Business. In 1999, it recieved its present name.

Four departments make up the College of Business: Accounting; Economics; Management; and Marketing and Finance.

The College of Education consists of two departments: Educational Professions; and Kinesiology and Recreation. 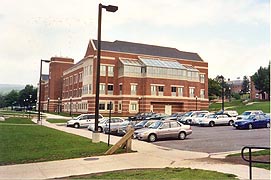 When the School of Arts and Humanities merged with the School of Natural and Social Sciences, the College of Liberal Arts and Sciences was formed in 1999.

The College of Liberal Arts and Sciences has nineteen departments and graduate degree programs in Applied Computer Science; Counseling Psychology; Applied Ecology and Conservation Biology; and Wildlife and Fisheries Biology.