The Design and Construction of the State Archives Building, 1982-86

The Maryland State Archives was created as an agency of State government in 1935 and was known as the Hall of Records. It became a division of the Department of General Services in 1968. Renamed the State Archives, it became an independent agency in the office of the Governor in 1984.

The State Archives houses its collections in a building designated by law as the Hall of Records. The first Hall of Records was constructed on the campus of St. John's College in Annapolis from 1934 to 1935 as part of the Tercentenary celebrations of the 300th anniversary of the founding of Maryland. The architect, Laurence Hall Fowler, created a design that was a celebration of Maryland colonial architecture. The reading room could accommodate 16 patrons and the stack capacity was sufficient to store 18,000 cubic feet of archival material.

This building was expected to meet the need for housing the permanently valuable records of Maryland through the year 2000. The tremendous growth of government during the succeeding three decades and the attendant accrual of record materials, however, far exceeded the storage space available. In 1969, the State Archivist realized additional storage space would be needed and initiated efforts to secure adequate facilities for the archival collections. By 1980, the Archives had become responsible for about 65,000 cubic feet of records which were stored in two warehouses as well as the Hall of Records.

In 1981, Dr. Edward C. Papenfuse, the State Archivist, and Assistance in Developing Educational Systems of Alexandria, Virginia, developed a program for a new building. In preparation for the task of constructing a new facility, Dr. Papenfuse spent many years evaluating comparable archival programs and facilities, both in the United States and Europe. Work on the program was completed in April, 1981 and the Department of General Services awarded a contract for architectural work to VVKR of Baltimore in July 1981.

Bruce A. Rich, AIA, was responsible for the architectural design of the building. Working with Dr. Papenfuse, program needs and relations of archival functions to space were incorporated in the design. Invaluable assistance in planning work areas was provided by Frank R. Torrey, a space planner with Flowers School Supply. Design work was completed in the fall of 1982.

Bids for construction were solicited in August of 1983 and a contract was awarded in November to CAM Construction of Hunt Valley, Maryland. Ground-breaking ceremonies were held in December and site work by the contractor began February 1984.

Simultaneously, bids were solicited by the Purchasing Bureau of the Department of General Services for a compact shelving system. Specifications for the shelving were developed by Dr. Papenfuse, Frank Torrey, and Chris Allan. Montel, Inc., of Montmaigny, Canada, was awarded a contract to furnish shelving in July 1984.

While the building was under construction, the Archives staff began the work necessary to move the collections. Using the shelving plans, record series were assigned locations. Volumes and boxes were labeled with the location in the new building. 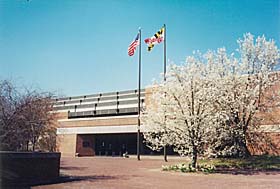 The building was accepted as substantially complete on June 17, 1986, and the Archives closed for the month of July to move its collections to the new facility. Archives staff completed the move of 18,000 cubic feet of records from the old building in less than eight weeks. The search room was opened for reference on August 4, 1986.

At the time this structure was completed, the Hall of Records had the second largest installation of compact shelving in the United States, exceeded only by the Madison Building of the Library of Congress. The Archives stack capacity is 160,000 cubic feet, with some 38 miles of shelving in the system. The weight of the equipment is 1.5 million pounds and the floor loading capacity in the stack areas is 350 pounds per square foot.

The public reference or search room can accommodate up to 60 researchers. From there, stack areas and the conservation lab are visible so that visitors can not only use the records, but also see and begin to understand how the Archives stores and cares for the records. The dominant feature of the room is a mural of the Ogilby map of Maryland, 1671, and the first published description of Maryland. The mural was fabricated and installed by Carlos A. Weber of York, Pennsylvania, using a transparency prepared by the Archives' photo duplication staff. The dimensions of the mural are 36' x 19'.

Remarkably, the Archives was constructed at a cost of 7.7 million dollars, 1.2 million dollars less than the appropriation. The shelving installation and equipment which was budgeted at 2.3 million dollars, cost the State 1.9 million dollars. Several factors contributed to the substantial savings in building construction. Careful planning and design work, a depressed construction market, and careful supervision all played an important part in bringing the building in under budget.

Public and professional response to the building has been favorable. A number of other states and countries seeking to build archival facilities have expressed interest in the new Hall of Records, rededicated on June 27, 2005, as the Edward C. Papenfuse State Archives Building.