State information technology policy is the responsibility of the Department of Information Technology. The Department develops, maintains, revises, and enforces information technology policies, procedures, and standards throughout State government. Moreover, the Department publishes and maintains the State Information Security Policy and its related security requirements. The Department, however, does not have authority over or responsibility for the University System of Maryland, Morgan State University, St. Mary's College of Maryland, the Maryland Port Administration, or the Maryland Stadium Authority (Chapter 150, Acts of 2018).

All information technology, and telecommunications systems and devices used by State agencies are coordinated, purchased, and managed by the Department.

To the Governor and all units of State government, the Department provides technical assistance, advice, and recommendations concerning information technology. Further, the Department annually reviews the project plans of State agencies for making their services and information available to the public on-line.

With Senate advice and consent, the Secretary of Information Technology is appointed by the Governor. The Secretary serves on the Governor's Executive Council, and chairs the Information Technology Advisory Council, the Statewide Interoperability Radio Control Board, and the Council on Open Data. The Secretary also serves on the Board of Directors, Assistive Technology Loan Program; the Criminal Justice Information Advisory Board; the Maryland Cybersecurity Council; the Management Committee of the EMaryland Application Service Provider Consortium; the Maryland Green Purchasing Committee; the Health and Human Services Referral Board; the Statewide Interoperability Executive Committee; the Commission to Advance Next Generation 9-1-1 Across Maryland; the Procurement Improvement Council; the Interdepartmental Advisory Committee on Small, Minority, and Women Business Affairs; and the Student Data Privacy Council.

STATEWIDE INTEROPERABILITY RADIO CONTROL BOARD
In June 2014, the Statewide Interoperability Radio Control Board was established in the Department of Information Technology (Chapter 117, Acts of 2014).

The Board coordinates the operation and maintenance of the Statewide Public Safety Interoperability Radio System, also known as Maryland FiRST. The System is a 700 MHz radio system that connects Maryland's first responders on one secure radio system. For the System, the Board establishes standard operating procedures, quality of service standards, and maintenace guidelines. The Board also is responsible for coordinating, adding, and removing System users; and resolving conflicts among users.

To the Governor and General Assembly, the Board recommends funding levels and resources needed for the Statewide Interoperability Radio Control Board System. The Board also negotiates use agreements with the federal government, neighboring states, and the District of Columbia.

User working groups advise the Board.

The Board consists of eleven members. Five members are appointed to four-year terms by the Governor; six serve ex officio. The Secretary of Information Technology serves as Chair (Code Public Safety Article, secs. 1-501 through 1-503).

The Office helps local Maryland jurisdictions improve their access to high-speed internet. Moreover, the Office identifies sources of funds for these services, including federal funds, and helps local governments apply for them.

In April 2018, demonstration projects on the Eastern Shore and in Western Maryland were completed and came under the oversight of the Office. In addition, the Office works to support and complement the assessments, evaluations, studies, and other work of the Task Force on Rural Internet, Broadband, Wireless, and Cellular Service, and act consistently with the goals and purposes of the Connecting Rural Maryland Act of 2017 (Chapters 620 & 621, Acts of 2017).

The Major Information Technology Development Project Fund supports major information technology development projects for which the estimated total cost of development equals or exceeds $1,000,000; or the project undertaken supports a critical business function associated with the public health, education, safety, or financial well-being of the citizens of Maryland; or the Secretary of Information Technology determines that the project requires the special attention and consideration given to a major information technology development project (Code State Finance & Procurement Article, secs. 3A-101, 3A-308, 3A-309).

Headed by an Assistant Secretary, Operations reformed in January 2017 to oversee units formerly under the Chief Operating Officer. 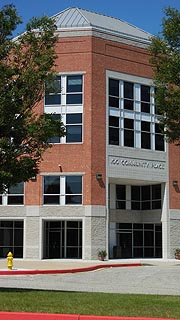 Infrastructure traces its origins to January 2005, when the Networks Division began within the Office of Information Technology under the Department of Budget and Management. The Division joined the Department of Information Technology in July 2008, and was placed under Operations in February 2009. Reorganized in April 2015, the Networks Division was renamed Infrastructure.

Critical communication infrastructure systems are maintained and supported by Infrastructure to improve broadband access for State agencies and critical local community institutions, such as schools, libraries, hospitals, and public safety agencies. These systems include construction of telecommunication towers; the maintenance and expansion of the State's communications fiber optic network, called networkMaryland; and a statewide radio communication system for first responders, called Maryland First.

Statewide networks, such as networkMaryland and the State's wireless microwave and radio systems, are implemented and operated by Infrastructure to ensure that State agencies have a cost-effective means for transmitting data and mobile information. Infrastructure also manages the State's inventory of cellular phones and the contracts for activating and deactivating cell phones, pagers, and other wireless devices.

END-USER COMPUTING & SUPPORT
End-User Computing and Support began as Customer Services under Enterprise Information Services. It became the Customer Service Center under Infrastructure in April 2015, and adopted its present name in February 2016.

This unit oversees Desktop Services and the Service Desk, which assists State agency users to resolve any difficulties they encounter using statewide computer applications, such as the Financial Management Information Systems. The Center provides on-line registration for training to use the Financial Management Information Systems, and maintains its Bulletin Board System, which provides daily updates on system problems, hour changes, batch cycle information, user group meetings, migrations, and other important information. In addition, The Center assists citizens using State agency websites maintained by the Department.

For State agencies, Voice Systems coordinates the development, procurement, management, and operation of telecommunication equipment and systems for voice applications. The office provides technical advice and consultation services to State and local governments. By developing policies and standards for the acquisition and use of voice systems, Voice Systems promotes the compatibility of telecommunications systems within State agencies.

In June 2019, the Office of Security Management was authorized within the Department of Information Technology by the Governor (Executive Order 01.01.2019.07). The Office replaced Statewide Security Services.

The Office's role with regard to strategy and policy also involves the management of security awareness training for State employees; assisting to develop data management, data governance, and data specification standards to promote standardization and reduce risk; and assisting to develop a digital identity standard and specification applicable to all parties who communicate, interact, or conduct business with or on behalf of State government.