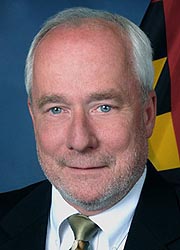 David W. Edgerley came to the Department of Business and Economic Development with an accomplished and varied economic development background. He led innovative and ambitious economic development efforts in Allegany and Montgomery Counties, giving him a broad perspective on Maryland's strong and diverse economy.

Secretary Edgerley received his B.A. from Frostburg State University, and an M.B.A. from Mount St. Mary's College. He is also a past president of the Maryland Economic Development Association. He and his family reside in Germantown, Maryland.