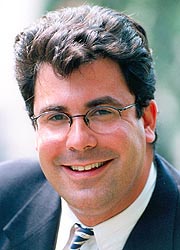 Board of Directors, University of Maryland Medical System Corporation, 2008-16.

Alan H. Fleischmann was Chief of Staff to Maryland Lt. Governor Kathleen Kennedy Townsend from 1995 to January 15, 2003. In this capacity, he served as both the chief operating officer of several government agencies, and the Lt. Governor's most senior advisor for management, policy, and politics. Under the Glendening-Townsend Administration, the Office of the Lt. Governor was charged with leading and managing the State's anti-crime and economic development efforts, and managing six executive department offices and five cabinet departments that together have a multi-billion dollar budget. Fleischmann's experiences include domestic and overseas management posts in the private and public sectors, specializing in finance, public and foreign policy, marketing, communications, negotiation, and strategic planning.

Until January 1995, Fleischmann served as Staff Director of the Committee on Foreign Affairs Subcommittee on the Western Hemisphere (Latin America, Caribbean, & Canada) of the U.S. Congress. He also served in an advisory support capacity to the House Permanent Select Committee on Intelligence, and was granted Top Secret (Code Word) D.O.D. Security Clearance. Fleischmann also was one of the key professional staff members who represented the United States Congress in the development of the 1994 Summit of the Americas in Miami.

Before joining the Committee on Foreign Affairs, Fleischmann worked in New York and South America as Vice-President at LATCORP, Inc. (Latin American Trade Corporation) where he developed joint ventures, franchises, and export-import agreements. Prior to that, he worked in New York and Buenos Aires, Argentina, as Second Vice-President with Chase Manhattan Bank's international private banking division. At Chase, Fleischmann managed a team of operations and finance experts in reorganizing and restructuring Chase Private Bank's activities and priorities in Argentina, Brazil, Uruguay, and Chile. Moreover, he was part of the leadership team that launched the Chase Vista Latin America Opportunity Fund, the first investment fund of its kind in the Western Hemisphere. (Fleischmann is a graduate of the Chase Manhattan Senior Management Development Program.)

Fleischmann received his M.A. with honors in international economics from The Johns Hopkins University Nitze School of Advanced International Studies (SAIS) and was a Deutscher Bundestag Fellow of the Friedrich Wilhelms Universität (University of Bonn) in Germany. He received his B.S. in political science and international studies from American University, where he was both valedictorian and the president of the University's student body.

As part of the fellowship in Germany, Fleischmann served as Policy Advisor on "North-South" economic development issues to the late German Chancellor Willy Brandt and Dr. Ingomar Hauchler, then the co-chairs of the Willy Brandt Foundation for Development and Peace, and senior members of the West German Parliament. Fleischmann's experience during college and graduate school included consulting work at SRI International in Arlington, Virginia; Citicorp/Citibank in New York; and UNICEF in Vienna, Austria. He is fluent in German and Spanish.

Fleischmann is a permanent member of the Council on Foreign Relations and serves on the Board of Directors of the OFFITBank, a New York-based private bank. He also has served as an advisor to the Secretary General of the Organization of American States (OAS), and is a member of the Americas Society. As a U.S. delegate, he participated in the 1995 Future of Europe Conference in London. He is an associate of the Inter-American Dialogue, an associate of the South-North Development Initiative (SNDI) of the Rockefeller Foundation; and a trustee of the Lauer Philanthropic Fund. Fleischmann serves on the boards of the Student Community Service Foundation; The Dan Dutko Memorial Foundation; Civic Works, Baltimore's urban service corps; and Youth Service America (YSA). He is a former Executive Board member of the Alumni Council of The Johns Hopkins University and serves on the Board of Advisors of the School of International Service (SIS) of American University.

Born in Baltimore, Maryland, Alan H. Fleischmann is a graduate of Gilman School. He is married to Dafna Tapiero, Knowledge and Partnership Manager, Financial Sector Vice Presidency of the World Bank.