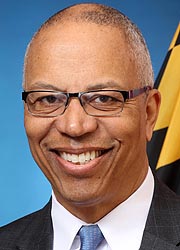 Lt. Governor Boyd Rutherford is an accomplished attorney with a lifetime of experience in both the public and private sectors. He served as Associate Administrator for the U.S. General Services Administration, where he was responsible for increasing the use of small businesses in government procurement, as well as continually improving the efficiency of the agency. In addition, Mr. Rutherford served as Assistant Secretary for Administration for the U.S. Department of Agriculture (USDA). He was nominated for the position by President George W. Bush and confirmed unanimously by the United States Senate. As Assistant Secretary, Mr. Rutherford led efforts that saved millions of taxpayer dollars.

Prior to serving with the U.S. Department of Agriculture, Mr. Rutherford served as Secretary of the Maryland Department of General Services under Governor Bob Ehrlich. In that capacity, Mr. Rutherford was responsible for more than $900 million in annual contract administration, and 10 million square feet of State-owned and State-leased facilities. As Secretary of General Services, he continued to find creative ways to save Maryland taxpayers millions of dollars, while also initiating and completing the expansion and renovation of numerous State buildings.

In addition to his public service, Lt. Governor Rutherford has extensive legal and business experience, including service in business and government law, information technology sales, and small and minority business development.

Lt. Governor Rutherford holds a Bachelor’s Degree in economics and political science from Howard University. Additionally, he has a Master’s Degree in communications management and a law degree, both from the University of Southern California.

Lt. Governor Rutherford resides in Columbia, Maryland, with his wife, Monica. They have three adult children.