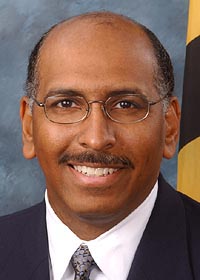 Lt. Governor Steele understood the value of cooperative assistance to help poor and underprivileged citizens. In that regard, Lt. Governor Steele worked with the Governor's Office on Community Initiatives which partners faith, community and volunteer organizations to assist Maryland citizens most in need. He also was a strong advocate for historically black colleges and universities, and helped strengthen and preserve the State's five institutions.

With State Police and the Maryland Vehicle Theft Prevention Council, Lt. Governor Steele worked to reduce crime and create safer neighborhoods. In addition, he forged a working partnership with the mayors of Maryland's 157 municipalities in order to strengthen ties between State and local government.

Michael S. Steele was born on October 19, 1958, at Andrews Air Force Base in Prince George's County, Maryland, and was raised in Washington, DC. He graduated from Archbishop Carroll High School, and earned his bachelor's degree in international relations from The Johns Hopkins University in 1981, and his law degree from Georgetown University Law Center in 1991. Mr. Steele also spent three years as a seminarian in the Order of St. Augustine in preparation for the priesthood.

From 1991 to 1997, Mr. Steele, a corporate securities attorney, worked as an associate at the international law firm of Cleary, Gottlieb, Steen & Hamilton in Washington, DC, specializing in sophisticated financial transactions on behalf of Wall Street underwriters. Mr. Steele worked in Cleary's Tokyo office in the area of major product liability litigation and in the London office, representing clients in the initial public offering of stock on the London Stock Exchange.

In December 2000, he was elected Chair of the Maryland Republican Party, the first African American to be elected Republican state party chair in the United States. In 2001, Mr. Steele served on the National Commission on Federal Election Reform. Other affiliations include service on the NAACP's Blue Ribbon Panel on Election Reform, the Board of Directors of The Hospice of the National Capital Area, and membership in the Knights of Columbus, the Prince George's County Chapter of the NAACP, and the Johns Hopkins Society of Black Alumni. He is a former member of the Board of Trustees of The Johns Hopkins University.

In 2002, President George W. Bush appointed Mr. Steele to serve a term on the Board of Visitors of the United States Naval Academy. Other affiliations included the State House Trust, the East Baltimore Development Corporation, and the Export-Import Bank Advisory Committee. Lt. Governor Steele also served on the African-American Advisory Committee for the Republican National Committee.

The distinguished awards and honors received by Lt. Governor Steele included being named a 2005 Aspen Institute Rodel Fellow in Public Leadership. He also was awarded the Bethune-DuBois Institute 2005 Award for his work in the ongoing development of quality education in Maryland.

Lt. Governor Steele is a member of St. Mary's Catholic Church in Landover Hills, Maryland, which he attends with his wife, Andrea, and their two sons, Michael and Drew. In 2005, he was chosen by the President to be part of the U.S. delegation at the investiture of Pope Benedict XVI in Vatican City on April 24, 2005.