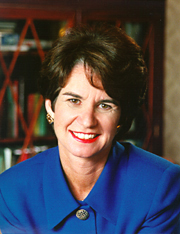 Board of Advisors (past chair), Institute of Human Virology, University of Maryland School of Medicine.

As Lt. Governor, Kathleen Kennedy Townsend's core mission was to make Maryland's communities safer, stronger, and more prosperous with innovative, effective answers to the State's most critical challenges. As Maryland's crime-fighting czar, as the designer of a nationwide model child and family services strategy, as a champion for service and volunteerism, and as the guiding force behind the State's economic development strategy, Kathleen Kennedy Townsend sought to engage the best energies of citizens, cut through ideological debates, and focus on results. Vice-President Al Gore has said that "Kathleen has done more for her state than most Governors."

In education, Lt. Governor Townsend created the first statewide office for character education to ensure that schools focus on values and teach children to know right from wrong. She led Maryland in becoming the first state to require community service as a prerequisite to high school graduation, so that the next generation learns first hand about citizenship and civic involvement. Under her leadership, Maryland increased funding for afterschool programs from $600,000 to over $14 million, and established the Maryland After-School Program Initiative. To prevent school violence, Lt. Governor Townsend developed a broad-based school safety strategy, which included placing juvenile probation officers in eighty of the State's most at-risk schools to resolve disputes before they escalate, supervise those students most likely to commit violent acts, and reduce classroom disruption.

To bring Marylanders into our fight against crime, Lt. Governor Townsend began the Maryland Police Corps, recruiting and training new officers in community policing techniques that build trust between citizens and law enforcement personnel. Her HotSpot Communities Initiative joined neighborhood groups with police, prosecutors, and government agencies to design and implement a comprehensive enforcement and prevention strategy in targeted high-crime neighborhoods. Hailed as a national model by U.S. Attorney General Janet Reno, HotSpots has gotten real results and significantly reduced crime and restored a sense of peace and security to communities throughout the State.

Lt. Governor Townsend used the same results-oriented strategy to maximize the impact of Maryland's other anti-crime efforts. Her pioneering Break the Cycle anti-drug initiative combined drug testing, escalating sanctions, and treatment to motivate addicted offenders to stay drug- and crime-free. Drug use by offenders in the program declined by 56%.

Recognizing that strong, healthy communities grow from strong, healthy families, Lt. Governor Townsend redesigned Maryland's children and family services to enable local communities to work together to meet the specific needs of families. The Family Violence Council, co-chaired by the Lt. Governor, strengthened laws and created programs to protect victims of domestic violence and break the cycle of abuse. Her leadership led to better health care for families. Now, over 95,000 of the State's neediest children have access to health insurance and over 60,000 senior citizens have access to affordable prescription drugs.

As Chair of the Cabinet Council on Business, Economic Development, and Transportation, Lt. Governor Townsend led Maryland's economic development initiatives, including support for the Maryland Technology Development Corporation, assisting small and minority business development, fostering the growth of biotechnology, and providing Baltimore/Washington International Airport with resources for growth. Along with Governor Glendening, she worked to reduce or eliminate over 30 separate taxes, including the first reduction of Maryland's personal income tax rate in 30 years. Under the leadership of the Glendening-Townsend Administration, Maryland's welfare rolls shrank by more than 62%, and Maryland's job creation rate jumped from 44th in the nation in 1994 to 16th in the nation in 1998.

Before becoming Lt. Governor, Mrs. Townsend served as Deputy Assistant Attorney General in the U.S. Department of Justice; chaired the Robert F. Kennedy Memorial Foundation; and founded the Robert F. Kennedy Human Rights Award. As the founder and executive director of the Maryland Student Service Alliance, she made Maryland the first State in the country to include a high school community service requirement. Mrs. Townsend also has taught at the University of Pennsylvania, the University of Maryland-Baltimore County (UMBC), and at Essex and Dundalk Community Colleges. Currently, she serves on the board of the John F. Kennedy Library Foundation.

The eldest child of Robert and Ethel Kennedy, Lt. Governor Townsend lives in Baltimore County with her husband, David, a professor at St. John's College in Annapolis. They have four daughters, Meaghan, Maeve, Kate, and Kerry.