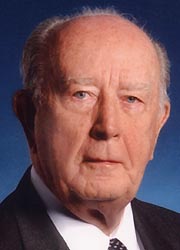 Governor Schaefer was a life-long Maryland resident, born in West Baltimore on November 2, 1921 to William Henry and Tululu Irene Schaefer. He was educated in Baltimore's public schools and graduated from Baltimore City College in 1939. Mr. Schaefer received his law degree in 1942.

Mr. Schaefer's legal career was put on hold by the entry of the United States into World War II. He joined the U.S. Army, achieved officer rank, and took charge of administering hospitals in England and Europe. Following his tour of duty, he remained in the U.S. Army Reserves, retiring in 1979 with the rank of Colonel.

After the war, Mr. Schaefer resumed his legal career, practicing real estate law. He earned a Master of Law degree in 1954 from the University of Baltimore School of Law and formed a general practice law firm with two colleagues. His concern for city planning and housing in the City propelled him to a seat on the Baltimore City Council in 1955.

In 1967, Mr. Schaefer ventured into citywide politics by running successfully for President of the Baltimore City Council. Four years later, he also ran successfully for Mayor, serving four consecutive terms until he was elected Governor in 1986.

Former Governor Schaefer held the Schaefer Chair at the University of Maryland's School of Public Affairs in conjunction with the Johns Hopkins University Institute for Policy Studies. He was actively involved in a project to revitalize the Hampden area of Baltimore, working with interns from Hopkins. Before his election as Comptroller, Mr. Schaefer was Of Counsel at the law firm of Gordon, Feinblatt, Rothman, Hoffberger & Hollander, LLC, in downtown Baltimore. In 1997, Governor Parris N. Glendening appointed Schaefer as Chair of the Maryland Commission for Celebration 2000, the State's official agency to plan and implement an observance of the millennium.

Former Governor Schaefer also was involved with many civic and charitable organizations and served on the boards of several nonprofit organizations, as well as State and local colleges.

He was the recipient of fifteen honorary degrees; the President's Medal, Johns Hopkins University; the Jefferson Award for Public Service by an elected official; the Vernon Eney Award, Maryland Bar Foundation; and the Distinguished Service Award, Maryland Democratic Party.