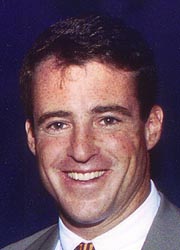 Douglas F. Gansler was first elected as Attorney General of Maryland on November 7, 2006, and was elected to a second term on November 2, 2010. In that last election, he was the only statewide candidate in the nation to run unopposed in both the primary and general elections. He credits that enviable position, and the 1.3 million votes he received, to the fine work of the entire staff at the Office of the Attorney General.

Since he took office in 2007, Attorney General Gansler focused on environmental, consumer and public safety issues. He distinguished himself by prosecuting polluters of the Chesapeake Bay, protecting consumers from various forms of fraud, and safeguarding the public from gangs, violent crime, and the underbelly of the Internet.

Safeguarding Our Environment. Attorney General Gansler secured the largest air quality settlement of its kind in the history of the United States. He also secured a Maryland history-making water pollution penalty, the largest civil penalty ever levied for an oil spill in Maryland, and the largest asbestos penalty in Maryland history. Mr. Gansler continually audited the tributaries that feed the Chesapeake Bay to identify polluters and take appropriate action.

Along with these and other significant enforcement victories against polluters, Mr. Gansler led the successful charge to have phosphates banned from dishwasher detergent, and arsenic banned from chicken feed. Moreover, he helped secure standing for environmental groups to sue polluters in State court.

Attorney General Gansler successfully championed innovative energy solutions, such as hotel-room key cards that cut the lights and automatically reduce energy consumption when an occupant leaves a hotel room, lowering hotels' energy bills in the process. He also laid the groundwork for construction of a power plant to convert 500 million pounds of chicken manure into energy, potentially keeping the single largest source of nitrogen and phosphorous out of the Chesapeake Bay, while providing Maryland farmers with an additional source of revenue. With this and similar projects, Mr. Gansler demonstrated that it is possible to protect Maryland's environment while simultaneously strengthening its economy.

Fighting for Maryland's Homeowners, Consumers & Taxpayers. While in office, Attorney General Gansler fought various forms of fraud that threaten home ownership, contribute to the ever-rising cost of health care, and undermine the financial security and well-being of Marylanders. In the fight against mortgage fraud alone, he recovered over $1 billion in relief and assistance for Maryland homeowners. He also secured nearly $100 million from fighting various other forms of fraud.

This work produced the largest recovery in a health-care fraud investigation in U.S. history against a major pharmaceutical company that illegally marketed drugs at the expense of consumer safety. This work also led to an agreement with all major car rental companies to end usurious refueling rates, and a settlement with all four major wireless carriers requiring disclosure of the terms of cell phone insurance, potentially saving Marylanders over $40 million, and Americans over $2.4 billion.

To promote the health and safety of Maryland teens, Mr. Gansler led the effort to limit youth access to alcohol and tobacco by combating the marketing practices of alcohol and tobacco companies that target younger consumers. This work brought an agreement with two of the largest alcohol manufacturers to stop the production and distribution of alcoholic “energy” drinks, as well as an agreement with one of the largest gas station franchises in the world to curb tobacco sales to minors at its 13,000 outlets across the United States.

Attorney General Gansler established a statewide Internet safety initiative focused on school-aged children, shut down an online anonymous gossip site being used to torment young students, helped eliminate the online illegal adult services section of Craigslist, and continued to work on a nationally coordinated effort targeting sexual predators who use social networking websites to lure victims. As a result of these efforts, tens of thousands of sexual predators have been removed from social networking sites. For this work, Mr. Gansler received the Champion of Online Safety Award.

Recognizing that rapid developments in Internet technology and enterprise have created new and significant privacy risks for both consumers and corporations, Attorney General Gansler led state and national efforts to protect online privacy. For example, he led a charge by 36 state attorneys general to demand accountability from the nation's largest provider of internet services when it unilaterally changed its privacy policy. Mr. Gansler also made “Privacy in the Digital Age” his initiative while serving as president of the National Association of Attorneys General. The initiative is exploring the best ways to manage privacy risks - from geo-location tracking to cyberbullying, from data collection to data breaches - bringing the energy and legal weight of the Association to investigate, educate, and take steps necessary to ensure that the Internet's major players protect online privacy and provide meaningful options for privacy control while continuing to enhance our lives and our economy.

Defending & Promoting Civil Rights. As Attorney General, Mr. Gansler continued his long-standing commitment to civil rights. He created the first-ever Director of Civil Rights position in the Office of Attorney General. He set up the Working Group on Lending Practices to reform sub-prime and predatory lending practices, and the Attorney General's Task Force on Voting Irregularities to address voter suppression issues in Maryland. He also published a groundbreaking report to provide guidance on taser training protocols that now are used nationally by law enforcement, and a report to assist Maryland's institutions of higher education in legally developing and maintaining diversity. To ensure diversity of the bench, he worked for judicial election reform. For this work, as well as his successful efforts to increase diversity both in the Montgomery County State's Attorney's Office and the Office of Attorney General, Mr. Gansler was awarded the Dr. Martin Luther King, Jr., Dream Keeper's Award.

For a legal opinion that clarifies the full faith and credit provided to valid out of state same-sex marriages that provided the underpinning for a recent Court of Appeals decision recognizing same-sex marriages from other states, and for being the first statewide elected official in Maryland to support marriage equality, Attorney General Gansler received the Ally for Equality Award.

Making a Difference. Prior to becoming Maryland's Attorney General, Mr. Gansler served for eight years as chief prosecutor in the largest jurisdiction in Maryland. Under his leadership, the Montgomery County State's Attorney's Office was the first in the country to fully implement community-based prosecution, becoming a nationwide model for effective crime-fighting programs. Mr. Gansler also launched innovative and successful programs to fight gangs, punish criminals, and protect the public, including the first domestic violence dockets and first drug courts in the County, a first-in-the-State gang prosecution unit, the first Elder Abuse Task Force in Maryland to specifically target criminals preying on seniors, and the first Internet crime unit in the State.

In addition to his prosecutorial experience, Mr. Gansler practiced civil litigation as of counsel in the law firm of Coburn & Schertler, and worked for two years as an associate at Howrey & Simon. Attorney General Gansler was selected as one of 24 elected leaders from throughout the country to serve as a Rodel Fellow with the Aspen Institute.