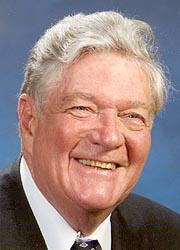 In 1986, Mr. Curran was elected Attorney General after serving four years as Lieutenant Governor with Governor Harry R. Hughes. In 1990, 1994, 1998, and 2002, he won re-election. Under Mr. Curran, the Attorney General's Office has been a national leader in consumer protection, criminal investigations, Medicaid fraud prosecution, securities regulation, and antitrust enforcement.

During his tenure, Mr. Curran has worked tirelessly on behalf of children and teens, parents, seniors, victims of domestic violence and sexual predators, and all Marylanders concerned about crime, gun violence, prescription drug abuse, and the potential impact of casino gambling.

Children & Teens. Mr. Curran has launched a variety of initiatives to help Maryland's children. To protect them against sexual predators, he championed a 2004 law making it a crime to solicit a minor by computer or other means to engage in unlawful sexual conduct. He also has proposed lifetime parole supervision for sex offenders and better notification to communities when sex offenders are released from prison. To reduce teen tobacco use, he led Maryland's participation in the landmark $206 billion national settlement with the tobacco industry, which garnered $4.4 billion for Maryland, and industry concessions on advertising and marketing cigarettes to teens. He has since filed suits to stop unlawful Internet cigarette sales and the use of hip-hop themes to target youth, and has reached agreements with national cigarette retailers to prevent sales to youth. He also led a multi-state initiative to encourage the motion picture industry to decrease smoking in youth-rated movies. To reduce juvenile crime, Mr. Curran issued a report on the link between children's exposure to media violence and youth aggression and delinquency, and distributed 600,000 media violence diaries to help parents monitor their children’s consumption of media violence. Mr. Curran has promoted juvenile crime prevention programs to help at-risk youth, including a mentoring program within his own office, and he conducted a statewide youth listening tour to make recommendations in his report, In Their Own Words, about how adults can improve their response to teens' problems.

Crime, Gun Violence, & the Death Penalty. In a landmark 1990 case, Maryland v. Craig, Attorney General Curran successfully urged the U.S. Supreme Court to uphold Maryland's law permitting victims of child abuse to testify via one-way television. Also before the Supreme Court, the Attorney General successfully litigated Maryland v. Wilson (1997). The Attorney General argued that police officers, who routinely conduct traffic stops that sometimes turn deadly, may order the passenger out of the car to allow the officer to safely process the traffic stop. Mr. Curran has long been a champion of efforts to reduce the epidemic of gun violence. He has worked for better laws and resources to help law enforcement keep guns out of the hands of criminals, including calling for restrictions on the ownership of handguns and establishing a firearms trafficking unit dedicated to the prosecution of persons who unlawfully purchase or attempt to purchase firearms. Always, he has called for abolition of the death penalty because inevitaby its continued use will lead to an irrevocable, unacceptable mistake - the execution of an innocent person.

Slot-Machine & Casino Gambling. Mr. Curran has been a consistent opponent of efforts to bring slot-machine and casino gambling to the State since his comprehensive study, The House Never Loses and Maryland Cannot Win. His conclusion that the costs of slot machines would far outweigh the benefits has since been supported by academic scholarship.

Domestic Violence. From his creation and stewardship of the Family Violence Council over ten years ago, through his latest initiative, Cut It Out, which provides outreach to victims through beauty salons, Mr. Curran has promoted new laws, developed innovative programs, and collaborated on training and education to help victims of domestic violence and reduce its tragic impact in Maryland.

Advanced Directives/Living Wills. Mr. Curran has led the effort to empower people in taking control of difficult decisions they may face at the end of their lives. He began with a groundbreaking opinion early in his tenure that a competent, terminally-ill patient can refuse life-sustaining treatment, and continued with broad educational outreach and dissemination of advanced directives. In 2005, he expanded that outreach by making living wills available in Spanish. He has issued the nation's first comprehensive guide to the role and responsibilities of a health care proxy, as well as a report on policy issues related to Alzheimer's disease. He also has successfully promoted legislation that created a state advisory council on end-of-life care, as well as legislation providing additional protections for Marylanders who become subjects in medical research.

Under Mr. Curran, the Attorney General's Office is one of the country's best. The Medicaid Fraud Division has obtained numerous convictions of health care providers engaged in defrauding the Medicaid Program, as well as of persons guilty of abuse or neglect of vulnerable adults. The Division also recovered millions of dollars for the Medicaid Program. Under Mr. Curran's direction, the Criminal Investigations Division has convicted hundreds of white collar criminals, both in State government and private industry, obtaining prison sentences all over the State and orders of restitution totalling millions of dollars. The Divsion has targeted such areas as public corruption, health care fraud, illegal gun trafficking, insurance and securities fraud, tax evasion, embezzlement, and vulnerable adult exploitation. The Consumer Protection Division also has obtained millions of dollars in restitution and fines through enforcement actions and in relief for consumers through its mediation efforts. The Securities Division protects Maryland investors from investment fraud and misrepresentation by administering and enforcing the provisions of the Maryland Securities Act, the Maryland Franchise Registration and Disclosure Law, the Maryland Business Opportunity Sales Act, and the Maryland Multilevel Distribution Companies Law. The Antitrust Division enforces the State’s antitrust laws and has recovered millions of dollars for both consumers and the State of Maryland; most recently, the Division recovered nearly $2.5 million for consumers and $3.4 million for the State of Maryland in seven separate antitrust cases brought against drug companies that were alleged to have entered into illegal contracts. In addition, Mr. Curran established an in-house continuing education program; encouraged assistant attorneys general to handle pro bono cases; and has recovered millions of dollars for the State in various cases.

Attorney General Curran began his career in public service in 1958 when he was elected to the House of Delegates as a law student. In 1962, he was elected to the State Senate. During this time, despite angry demonstrators picketing his home, he advocated open housing laws for Maryland. In 1967, Mr. Curran became chair of the Judicial Proceedings Committee and held that position for sixteen years.

In the General Assembly, Mr. Curran sponsored or fought for significant bills, including those creating the Court of Special Appeals and the District Court system. He consistently supported bills to improve the courts and the corrections system, toughen drunk-driving laws, guarantee equal rights, and require handgun permits. He also worked to modernize Maryland's divorce and alimony laws, reform adoption and guardianship, and protect victims of domestic violence.

Mr. Curran is married to the former Barbara Marie Atkins. They are the parents of five children, Mary Carole, Alice, Catherine, J. Joseph III (Max), and William (deceased). The Currans reside in the Homeland section of Baltimore.