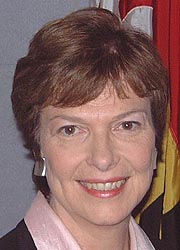 To honor Delegate Lawton, the General Assembly in 2008 enacted the Jane Lawton Farm-to-School Program, administered by the Department of Agriculture (Chapters 371 & 372, Acts of 2008; Code Agriculture Article, sec. 10-1601). Under this Program, Maryland farm products are promoted for use in school lunch programs; and students are educated about where their food comes from, how it is produced, and the benefits of a healthy diet. The Program serves to increase sales by local farmers for healthier school lunches and higher farm income.