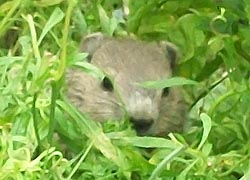 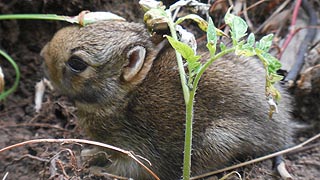 In 1632, Father Andrew White wrote of mammals seen in Maryland: "But so great is the abundance of swine and deer that they are rather troublesome than advantageous. Cows also are innumerable, and oxen suitable for bearing burdens or for food; besides five other kinds of large beasts unknown to us." 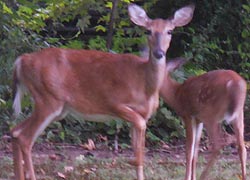 Today, still in Maryland, mammals of all shapes and sizes can be found. Many different species of canine, chiroptera (bats), feline, mustelid (badgers and weasels), and rodent are located in the State. Many may be seen at local, national and State parks.

Making a home in Elkton (Cecil County), Maryland, is a population of White squirrels, a leucistic (differ from albino, as eyes contain pigment) variant of Gray Squirrels. 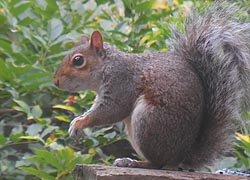 Due to ecological and sociological changes, some species are few in number and location, but efforts are underway to protect, restore, and maintain these populations. The Delmarva Fox Squirrel, a species found only on the Delmarva Peninsula, recently was removed from the Endangered Species List after its population rebounded. Assateague horses in Maryland are managed by the National Park Service, which maintains a herd of about 105 of them. 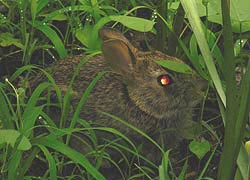 Other species from outside Maryland have found sustainable habitats throughout the State. Originally from the Midwest, coyotes, for example, have settled in Maryland and thrive in both rural areas and suburbs. 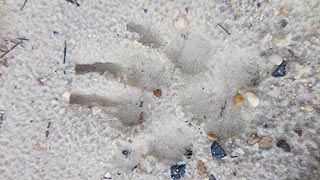 Bear, American Black (Ursus americanus)
Omnivore; crepuscular; ursidae; 5 to 6 feet long, 2.5 to 3 feet tall at shoulder (approx. 7 feet tall when up on two legs), weighs up to 660 lbs. Can reach speeds up to 30 mph. Hibernates during winter months. Most common bear species native to North America.

Cougar (Puma concolor)
Carnivore; crepuscular; feline; 5 to 9 feet long (including tail), 2 to 2.5 feet tall at shoulders; weighs 64 to 198 lbs. Skilled climber. Can reach speeds up to 45 mph. Can leap up to 18 feet vertically, 40 feet horizontally. Also known as Mountain Lion, Panther, and Puma.
Classified as regionally extinct (no wild occurrences) in Maryland. 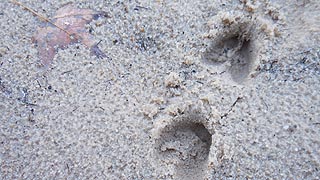 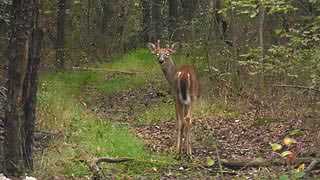 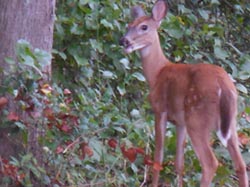 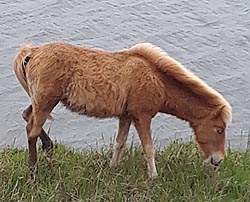 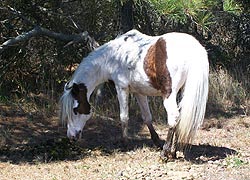 The origin of the ponies of Assateague Island is unknown. Some speculate that they arrived in the 17th or 18th century, escaping from shipwrecked vessels by swimming to shore. Others contend that early settlers left the horses to roam on the Island to avoid taxes and duties on grazing land. 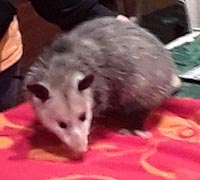 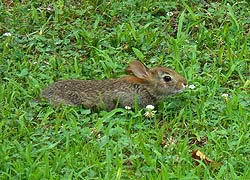 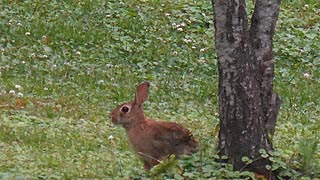 Rabbit, Appalachian Cottontail (Sylvilagus obscurus)
Herbivore; crepuscular; leporidae; 15.5 to 17 inches long; weighs 1.75 to 2.5 lbs. Almost indistinct from Sylvilagus floridanus, but its distinct separating feature is the dark patch of fur between its ears. Can reach speeds up to 18 mph. 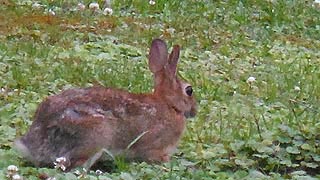 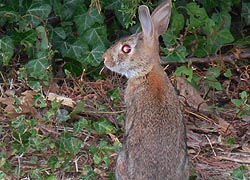 Seal, Harbor (Phoca vitulina)
Carnivore; diurnal; pinnipedia; up to 6.1 feet long. May be brown, gray, or tan in color. Distinguished from gray seals by shorter nose, and mottled coloring. Migratory. 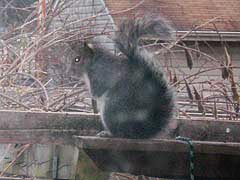 Whale, Blue (Balaenoptera musculus)
Carnivore; balaenopteridae; up to 110 feet long; weighs up to 165 tons; long, tapered blue-gray back with light belly; ridge from blowhole to upper lip; baleen plates in mouth, grooves or pleats along throat. Capable of short bursts of speed. Lives alone or in a pair. Largest and heaviest animal in the world. Also known as Sulphur Bottom.
Classified as Endangered.


Whale, Cuvier's Beaked (Ziphius cavirostris)
Carnivore; ziphiidae; 16 to 24 feet long; weighs up to 6,800 pounds; cigar-shaped gray or brown-red back with light belly; often covered with scars and scratches; white stripe along back; males have a pair of teeth on lower jaw's tip; small concave head and short beak; small flippers can be tucked into body. Lives in small pod; barely visible at surface. Named for Georges Cuvier, who first described them. Also known as Goose-beaked Whale.

Whale, Fin (Balaenoptera physalus)
Carnivore; balaenopteridae; up to 85 feet long; weighs up to 80 tons; sleek, slender black or gray-brown back with white belly; right lower jaw is white while left is black; underside of tail is white with gray outline; "V"-shaped head with gray marks behind it; baleen plates in mouth, pleats along throat. Fast swimmer. Feeds by lunging into prey schools. Lives in small pod. Also known as Common Rorqual, Finback Whale, and Razorback.
Classified as Endangered.

Whale, Humpback (Megaptera novaeangliae)
Carnivore; balaenopteridae; up to 60 feet long; weighs up to 40 tons; gray-black stocky back with mottled belly; arches or humps back before dive; flippers are black or white on top, white on bottom with knob-like forms on the front edges; hairy tubercles or nodules on head and lower jaw; long pectoral fins; baleen plates in mouth, pleats along throat. Pigmentation pattern on underside of tail or fluke similar to human fingerprint. Acrobatic, known for breaching and slapping fins or tail against the water. Males "sing" songs that change over time, though all males in a population sing the same song. Traps prey in "bubble nets" before lunging in. Lives alone or in small pod.
Classified as Endangered.

Whale, Killer (Orcinus orca)
Carnivore; delphinidae; up to 32 feet long; weighs up to 11 tons; black back with white belly and white patches near eyes; tall dorsal fin with white or gray "saddle" or patch behind it. Teeth can grow up to 4 inches long. Hunts prey in groups, similar to wolf packs. Intelligent. Lives in small matriarchal pod. Also known as Blackfish, Orca, and Sea Wolf.

Whale, Sei (Balaenoptera borealis)
Carnivore; balaenopteridae; up to 60 feet long; weighs up to 50 tons; sleek gray-blue or black back with light belly is often scarred; tall, hooked dorsal fin; baleen plates in mouth, pleats along throat. Blows at surface can be up to 13 feet high. Fast swimmer. Lives in small pod. Name is Norwegian for pollock.
Classified as Endangered.

Whale, Short-finned Pilot (Globicephala macrorhynchus)
Carnivore; delphinidae; up to 24 feet long; weighs up to 6,600 pounds; square head and black, gray, or brown back with white or gray "saddle" or patch behind dorsal fin; white-gray patch on belly and throat and white-gray stripe behind eyes; pointed flippers. Lives in pod.

Whale, Sperm (Physeter macrocephalus)
Carnivore; physeteridae; up to 52 feet long; weighs up to 45 tons; large head and gray back with occasional white markings on belly; ridged, wrinkled back; mouth's interior can be white; "spermaceti organ" in head that contains oil; blowhole on left side of head. Largest brain on Earth. Can stay submerged for over an hour. Lives alone or in pods. Also known as Cachalot.
Classified as Endangered.

Whale, True's Beaked (Mesoplodon mirus)
Carnivore; ziphiidae; up to 17 feet long; weighs up to 3,000 pounds; brown or gray back with lighter belly and dark patches around eyes, mouth, and dorsal fin; crease behind blowhole; wide midsection. Males usually are scarred and have a pair of teeth on tip of lower jaw. Lives alone or in pods. Named for Frederick W. True, who first described them.

Wolf, Gray (Canis lupus)
Carnivore; both diurnal and nocturnal; canine; 3.5 to 5.5 feet long, 2 to 3 feet tall at shoulder. Pack hunter. Can reach speeds up to 40 mph.
The gray wolf is regionally extinct (no wild occurrences) in Maryland. 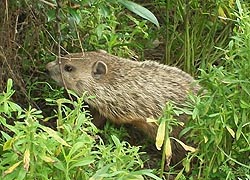