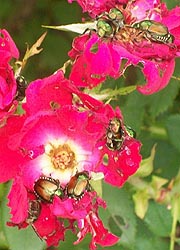 No insects noted below are native to Maryland.

Asian Longhorned Beetle (Anoplophora glabripennis)
(no recorded cases in Maryland; classified as potential threat)
First discovered in the United States in 1996, the Asian Longhorned Beetle has been found in Illinois, New Jersey, and New York. This species is considered a serious threat due to its voracious appetite for hardwood trees, its high reproductive rate, and the lack of any natural predators.

Ranging from 0.75 to 1.25 inches in length, the Asian Longhorned Beetle is a very noticable insect. Also known as the Starry Sky Beetle, this insect is primarily black in color, with white patches along the edge of its shell. Its long antennae, which give the beetle its name, are covered with interspersed black and white bands over the entire length. The Asian Longhorned Beetle is sometimes mistaken for a member of the Sawyer (family Monochamus) family of beetles, which is similar in size and pattern.

Upon discovery of any beetle suspected of being the Asian Longhorned, the insect should be captured (or saved if dead) and reported to the Maryland Department of Agriculture immediately.

A tiny creature, the Asian Tiger Mosquito ranges from 0.06 to 0.38 inches in length, and is black in color with white striping along its legs and body. Unlike other species of mosquitos, it is much more prolific in urban areas. This is due in part to its ability to lay and hatch eggs with much less water than domestic species. Whereas most indigenous species are common to wetlands and require larger bodies of standing water, this species can thrive on the standing water found in childrens toys, lawn furniture, or even something as small as a disposable plastic cup. Combined, a lack of natural predators, and its ability to "crowd out" feeding areas, have made it the primary pest insect in many areas of the State.

The total life cycle of the Asian Tiger Mosquito is approximately a year, with eggs being laid regularly during warmer months. Laid just above water level, eggs can remain viable over the Winter even though exposed to the elements. Upon hatching, larvae go through a series of molts, and can mature as early as May. Upon reaching maturity, females may lay eggs weekly depending on environmental factors. Over the course of her life, a female may lay as many as 300 eggs.

Another threat posed by the Asian Tiger Mosquito is its role as a vector for numerous diseses to both people and pets. Among other diseases, it is a known carrier of the West Nile Virus.

in Maryland. Reproducing asexually, the weevil lays eggs at the base of herbaceous perennials, such as yews, rhododendrons, and hostas. Upon hatching, the larva feed on the trunk of the bush, often feeding until the base is chewed clear through. 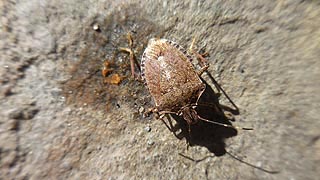 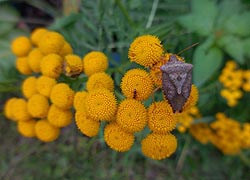 First recorded in Maryland in 2003, the Department of Agriculture issued a quarantine on planting and transporting ash trees within or through Prince George’s County after borers were again discovered in 2006. In 2008, the quarantine was expanded to include Charles County in an effort to restrict the spread of the known infestation along the County line. The Department also is hanging traps in other threatened areas of the State to determine possible borer infestation.

Fire Ant (red imported) (Solenopsis invica)
(isolated colonies recorded, none established)
Imported from South America in the 1930s, the Imported Red Fire Ant is classified as an Invasive Species of Concern in Maryland. While this species has been found in Maryland, no established colonies have been recorded in the State.

If a Fire Ant is found, contact the Maryland Department of Agriculture immediately. Bites from a Fire Ant may require emergency care.

Gypsy Moth (Lymantria dispar)
Introduced to the United States from Europe in the 1890s, the Gypsy Moth did not establish a presence in Maryland until the late 1970s and early 1980s. Although great pains are undertaken by federal, State and local agencies to reduce and slow the spread of the species, studies predict that stopping the spread of Gypsy Moths altogether is impossible. Further complicating efforts, an Asian cousin, the Japanese Gypsy Moth (Lymantria japonica), was introduced to the West Coast in 1991. At this time, none of these have been found in Maryland.

Hemlock Woolly Adelgid (Adelges tsugae)
Although established from Tennessee to Maine, and found throughout most of the State, as of 2009, no established colonies have been reported in Southern Maryland (Charles & St. Mary's counties) or the lower Eastern Shore (Dorchester, Somerset, Wicomico, & Worcester counties). Known for creating a distinct white "wooly" wax along infected branches, the Adelgid itself is often unnoticed, due to its nearly microscopic size. As an adult, the Adelgid is no bigger than a period on a printed page.

Japanese Beetle (Popillia japonica)
First recorded in United States in 1916, the Japanese Bettle now is found in most states east of the Mississippi River, with scattered infestation along the West Coast.

Possessing distinct copper-colored forewings that serve as a shell when not in flight, the Japanese beetle ranges from 0.4 to 0.6 inches in length. Destructive to foliage, this beetle feeds off leaf matter between the veins.

Although Japanese beetle traps are readily available and effective, recent studies show that these traps may draw more beetles than they trap. This, in turn, leads to more foliage destruction along flight paths, as well as at the trap's location, than would have occurred without the trap. 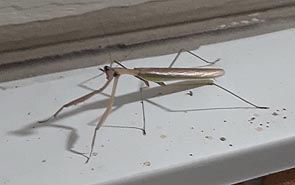 Mantis (order Mantodea)
In Maryland, three non-native mantid species are found: the Chinese, the European, and the Japanese or Narrow-Winged. Their presence is thought to be a reason as to why the native Carolina Mantid's populations are declining throughout the State. Though they may be beneficial in gardens since they eat pest insects, these species of mantis, particularly the Chinese Mantis, are considered invasive. 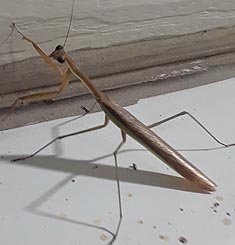 Introduced in the United States in 1896, the Chinese Mantis (Tenodera sinensis) is the largest mantis found in the nation. They grow up to 6 inches in length, and now are the most common mantis species in Maryland. With long, thin bodies that can be green or tan with a green stripe, the Chinese Mantis have a yellow spot between their forelegs. This mantis is known to eat hummingbirds and other birds, as well as frogs and snakes.

The European Mantis (Mantis religiosa) was introduced in the United States in 1899. Growing up to around 3 inches in length, they have a black-lined pale spot on interior of their forelegs. While usually green, they also can appear brown, yellow, or even black.

Like the previous mantis species, the Japanese or Narrow-Winged Mantis (Tenodera angustipennis) was introduced into the United States. While similar to the Chinese Mantis, they are distinguished by an orange spot between their forelegs and shorter wings.

Pine Shoot Beetle (Tomicus pniperda)
Native to Europe and Asia, the Pine Shoot Beetle first was discovered in the United States in 1992. By 2005, this beetle had been located in five Maryland counties. In an effort to stop its spread, the Department of Agriculture issued quarantine restrictions on sale and transportation of pine trees in and through Maryland. In June 2010, the beetle was found in four more counties, and a second Quarantine Order was issued, covering some nine counties.

Spotted Lanternfly (Lycorma delicatula)
Indigenous to China, India, and Vietnam, the Spotted Lanternfly first was detected in the United States in Pennsylvania in September 2014, and has since been found in Delaware, New Jersey, and Virginia. Its presence was confirmed in Maryland on October 25, 2018. Though its preferred host plant is the tree-of-heaven, the Spotted Lanternfly is considered a major threat to fruit and ornamental trees, grape vines, and crops, causing damage, stunted growth, blackening from mold, and possible death. In September 2019, the Maryland Department of Agriculture, under the supervision of the U.S. Department of Agriculture, sprayed herbicides and insecticides in areas of Harford and Cecil Counties where the Lanterfly has been discovered.

A planthopper, the inch-long Spotted Lanternfly has a black head and body and a yellow-brown abdomen with black stripes. While it generally jumps between locations, the Spotted Lanternfly can fly and has two pairs of wings. The fore wing is gray-brown with black spots, which become extremely dense at the tips. The bottom portion of the hind wing is red with black spots, while the top has a white band and black tip. The eggs, up to 50 in a mass, are laid on any vertical surfaces, both natural and manmade, and covered with gray-brown wax film.

If the Spotted Lanternfly or its eggs are discovered, they should be photographed, collected, frozen, and reported immediately to the Maryland Department of Agriculture: (410) 841-5920; e-mail: DontBug.MD@maryland.gov
.