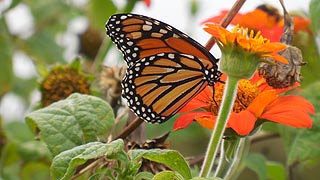 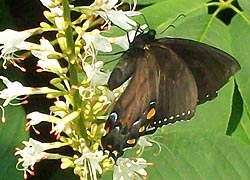 There are over 150 species of butterflies and skippers throughout Maryland. Butterflies, depending on the species, pollinate plants or eat harmful insects, and their presence (or lack thereof) is an indicator of the health of the surrounding environment. Many species are found in a variety of habitats, but some stay within a specific area, close to their food source. 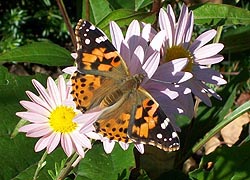 Butterflies go through three stages before they reach the final adult stage: egg, caterpillar or larvae, and pupa or chrysalis. Adult butterflies have four finely-scaled wings, scaled bodies, six legs, two compound eyes, and a proboscis or mouthpart. They are diurnal and can live up to a year, depending on the species, but most live much shorter lives. 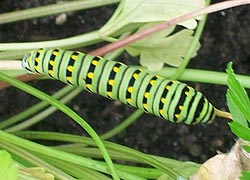 Butterflies (Rhopalocera). Butterflies belong to the suborder Rhopalocera. They can be further divided into three groups or superfamilies: true butterflies, skippers, and moth-butterflies.

2) Skippers (Hesperioidea) are named for the erratic way they fly. They have stout bodies and hooked antennae. Their small wings are more rounded, but they can have pointed forewings. Most skippers are brown or grey, though they may have colorful markings. 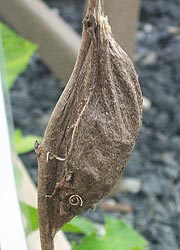 3) Moth-butterflies (Hedyloidea) have long, thin abdomens, broad wings, and feathery antennae and they tend to have a duller coloration.

Moths (Heterocera). Moths belong to the suborder Heterocera. They generally are dull in color, usually grey or brown, but can have wave-like or swirl patterns on their wings to serve as camouflage. They have stout, hairy-like bodies, broad wings with large scales, feathery, unclubbed antennae, and a proboscis. A frenulum, or a line of tissue connects their wings. Unlike butterflies, most moth caterpillars form a silk cocoon instead of a chysalis. Moths are generally nocturnal. 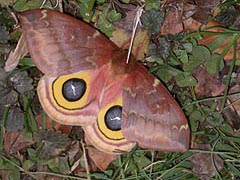 Butterflies & Moths (order Lepidoptera)
The common belief that moths are furry, while butterflies are not, is scientifically inaccurate. Although individual species may be called either butterfly or moth, the two are so closely related that division even at the family level is not considered sound. 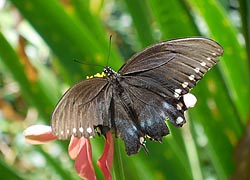 What distinguishes Lepidoptera are their comparatively large wings and antennae. While a small number of species possess crossvein wings, most have large membranous wings of various colors and patterns. Although the colors and patterns of butterflies are beautiful, they serve as camouflage or as a warning to predators. 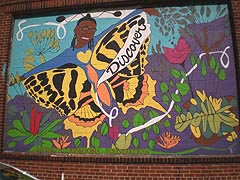 The Baltimore Checkerspot (Euphydryas phaeton) butterfly is the Maryland State Insect, but is endangered like the Frosted Elfin, the King's Hairstreak and the Olympia Marble. 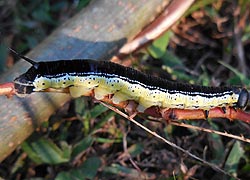 Caterpillars
Caterpillars are the larvae stage of butterflies or moths. 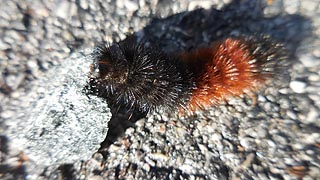 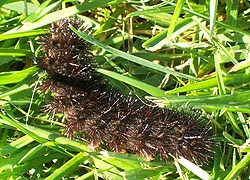 Woolly bears, or woolly worms, are the fuzzy caterpillars that later turn into moths. Their bodies are covered with thick coats of bristles or setae. Woolly bears eat grass, herbs, and plant leaves. They will roll into a defensive ball if disturbed.