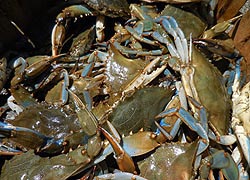 The creepy, crawly creatures of Maryland are encompassed by the scientific classification: Arthropods. Composing this phylum are Chelicerates (spiders, scorpions, horseshoe crabs, etc.), Crustaceans (crabs, lobsters, etc.), Hexapods (insects & insect-like organisms), and Myriapods (centipedes, etc.). With thousands of individual species, arthropods are found in every area of the State.

Animals within this subpylum originated as marine life, with the first confirmed chelicerate fossils dating to 445 million years ago. They are divided into Arachnida (spiders, etc.), Pycnogonida (sea spiders), and Merostomata (horseshoe crabs).

Pycnogonida, or sea spiders, are not "true" spiders, and are not members of the Arachnid phylum. While some species are found with eight legs, others possess ten or twelve. This does not include other appendages possessed by sea spiders that "true" spiders lack. These may be small "arms," known as chelifores, that can be used in aquiring food, caring for young, or even courtship. In species without chelifores, the proboscis is more developed, and acts much as a secondary limb. Another distinction is that sea spiders lack the respiration process. Instead, these spiders absorb and release gasses through their skin, a process known as diffusion. 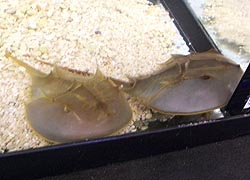 Merostomata includes two groups, the now-extinct Eurypterids, or sea scorpions, and Xiphosura, or horseshoe crabs. Eurypterids disappeared from the fossil record approximately 250 million years ago. Horseshoe crabs are not "true" crabs, and actually more closely relate to spiders. While horseshoe crabs are found in the fossil record dating back more than 450 million years, the Limulidae is the only known family of its order still in existence. All other families within order Xiphosurida are extinct. 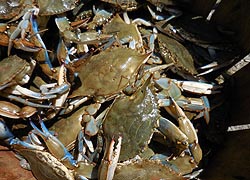 The most visible crustaceans in Maryland are crabs, lobsters, and shrimp. 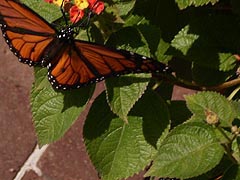 Over sixty percent of all known species on earth are hexapods, or insects. Of these, beetles comprise more than a third.

Myriapoda encompasses four classes: Centipedes, Millipedes, Pauropods, and Symphylans. Myriapods may have between ten and a thousand legs. With the exception of certain species, myriapods are largely herbivorous. Also common among myriapods is the practice of parthenogenesis, a form of asexual reproduction. Generally found in moist forests, myriapods can be encountered in nearly any environ.

Centipedes (class Chilopoda)
Nocturnal. Unlike other classes, centipedes are predominately carnivorous. Only class to possess compound eyes. Number of legs range from 20 to over 300. Unique among myriapoda, centipedes possess venomous pincers near their mouth.

Millipedes (class Diplopoda)
Though not possessing a thousand legs (as their name implies), a single species of the order (Illacme Plenipes) has as many as 750. Eats decaying leaves and other plant matter. Generally harmless, but may become a pest if exposed to restricted food supply (i.e. greenhouses). Possessing a plated shell, millipedes are the most diverse in size of the myriapoda classes, ranging from 2 millimeters to 11 inches in length. Although the largest recorded species reached over 15 inches, species found in Maryland generally are much smaller. Domestic millipedes tend towards earth colors, such as tans and browns. Slow, and without bite or sting, a millipedes' primary defense is to curl in on itself allowing its shell to form an armored ball.

Symphylans (class Symphyla)
Adults range from 2 to 10 millimeters in length. Lack eyes or pigment. Burrowing myriapod, digging as deep as 20 inches below the surface. Generally consume decaying plant matter, although may become a pest if soil is cultivated (brings symphylans closer to surface, where they may eat seeds or roots of planted vegetation). May live up to four years.