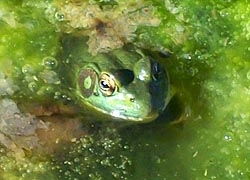 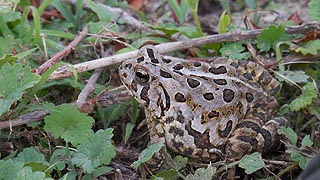 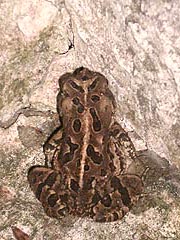 The Amphibian is an ectothermic (cold-blooded) class of animals which includes frogs, newts, salamanders, and toads. Like most scientific names, Amphibia, is derived from Latin, and means "double life," signifying the importance of both water and land habitats for most amphibians. Indeed, amphibians are born underwater, and possess the necessary traits for such life. After an amount of time (varying by species), they undergo a metamorphosis that dramatically alters their physiology.

Amphibians are classified into three orders: Anura, Apoda, and Caudata.

A permit may be necessary to own an amphibian, but one is required in order to breed or sell native species. 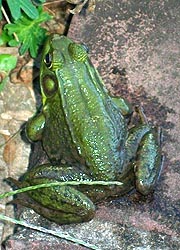 Frogs, in general, have smooth or moist skin, and long legs for leaping. They tend to be aquatic. Toads, however, especially those in the family Bufonidae, are heavyset with dry, rough, wart-covered skin, and shorter legs used for hopping. Primarily they are terrestrial. There are, of course, exceptions in both cases.

APODA (tailed amphibians, but without legs). No native species in Maryland. 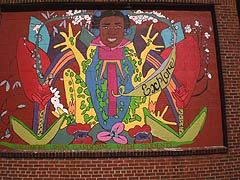 Salamanders generally have short bodies, four short legs, long tails, and smooth, moist skin. They can be camouflaged or brightly colored or patterned, and tend to be terrestrial.

Newts look similar to salamanders, but may have rough skin, and are either aquatic or semi-aquatic. 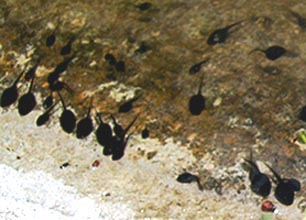 Hellbenders have four short legs, long, flat bodies, slimy skin, flat heads, and wide tails. They have small eyes, a gill slit behind their heads, and thick, wrinkled folds along their sides. They are aquatic.

Sirens have long, eel-like bodies, tiny front legs and no back legs. With external gills, they are aquatic.

Bullfrog, American (Lithobates catesbeianus)
Largest member of the Ranidae family, it may reach 8 inches in length. Predominately found in ponds or marshes (free of fish), also in lakes or rivers. Due to its large size, a Bullfrog can jump three to six feet in a single leap, and has a diverse diet. Primarily feeding on insects and crayfish, it may be observed eating snakes, small mammals, birds, and other frogs. Tadpoles hatch from eggs in four to five days, with their metamorphosis lasting as long as three years. Bullfrogs tend to live six to seven years; longest recorded lifespan is sixteen years.

Frog, Northern Cricket (Acris crepitans)
Wart-covered body that is usually brown with green blotches. Dark stripe on each thigh and a dark triangle between eyes. 0.6 to 1.4 inches in length. 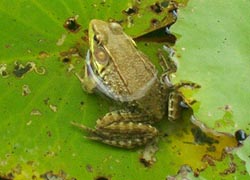 Frog, Green (Lithobates clamitans)
Typically green with brown patches or spots, males may have yellow throats. Dorso-lateral ridge extends only to mid-back. 2 to 3.5 inches in length. Green Frogs prefer ponds or marshes (free of fish), but also appear in any area with suitable moisture and food, including ditches and streams. Tadpoles usually mature in a year. Formerly known as Northern Green Frog.

Frog, Mid-Atlantic Coast Leopard (Lithobates kauffeldi)
Coloration varies from gray to green to brown with dark spots scattered across legs and back; thighs are dark with yellow-green spots. Round snout and pointed head with possible pale white spot on eardrum. Smooth skin, yellow ridges along each side of back, and white belly. Males have large forelimbs and the vocal sacs near their jaws produce a distinct "chuck" sound. Up to 5 inches in length. Lives in open areas, such as wetlands and grassy edges along slow-moving water.

Frog, Southern Leopard (Lithobates sphenocephalus utricularius)
Green or brown body, with dark spots on back, sides, and front legs. 2 to 3.5 inches in length. White spot in center of the ear.

Mudpuppy (Necturus maculosus)
Brown, blue-black, or gray back with dark spots or blotches. Long body, three pairs of red gills. 8 to 13 inches in length. Dark stripe from snout to gills. Formerly known as Common Mudpuppy.
Classified as Endangered/Extirpated in Maryland.

Newt, Eastern (Notophthalmus viridescens)
Olive-green or yellow-brown backs and yellow bellies with black spots. Red spots encircled in a black line runs down the back. 2.3 to 4.8 inches in length. Formerly called Red-spotted Newt.

Salamander, Dusky (Desmognathus fuscus)
Grey or brown body with a light stripe on back. Light line runs from eye to jaw. 2.5 to 4.5 inches in length.

Salamander, Eastern Red-backed (Plethodon cinereus)
Color can be either "redback," red (or orange, yellow, or gray) stripe along back with dark sides, or "leadback," dark gray or black. Both have black and white bellies. 2.3 to 4 inches in length.

Salamander, Four-toed (Hemidactylium scutatum)
Brown back with gray sides, white belly with small black spots, four toes on each foot, marked constriction at base of tail. 2 to 3.5 inches in length.

Salamander, Jefferson (Ambystoma jeffersonianum)
Color is dark brown or gray. Primarily found in deciduous forests, it spends most of its life underground in burrows abandoned by other animals, near ponds. Average lifespan is six years. Capable of shedding tail to escape predators.
Placed on Watchlist.

Salamander, Northern Slimy (Plethodon glutinosus)
Black in color with silver or gold spots. Sticky when handled. 4.8 to 6.8 inches in length.

Salamander, Northern Two-lined (Eurycea bislineata)
Green-yellow or orange body with dark lines and spots on back. 2.5 to 3.8 inches in length.

Salamander, Spotted (Ambystoma maculatum)
Black or gray-brown body with two rows of yellow or orange spots. 6 to 7.8 inches in length.

Salamander, Valley and Ridge (Plethodon hoffmani)
Brown body with white spots and gold flecks. 3 to 4.5 inches in length with tail comprising 50% of the total.

Salamander, Wehrle's (Plethodon wehrlei)
Brown or black with gold or white spots on back and white or yellow spots or bands along sides. 4 inches in length.
Classified as In Need of Conservation.

Toad, American (Anaxyrus americanus)
Skin color ranges from brown to red, with darker spots, lighter dorsal stripe, and mottled belly. Adults are 5.1 to 9 inches in length. May be found in any area with adequate moisture and food. Tadpoles hatch from eggs after a week, and metamorphose in about three weeks. Formerly known as Eastern American Toad.

Toad, Eastern Narrow-Mouthed (Gastrophyrene carolinensis)
Skin is mottled, with browns, reds, or grays, two lighter dorsal stripes, and a distinct ridge of skin at the back of its head. Adults are 0.8 to 1.25 inches long.
Classified as Endangered. 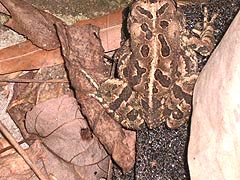 Toad, Fowler's (Anaxyrus fowleri)
Brown or gray in color with darker spots, as well as a lighter dorsal stripe and white belly. Prefers sandy areas, such as river valleys, and shorelines. Tadpoles hatch from eggs after a week, and metamorphose in four to eight weeks.

Treefrog, Barking (Hyla gratiosa)
Generally green in color, but has color-changing ability. Rounds rings on back. Largest treefrog in Maryland. 2 to 2.6 inches in length.
Classified as Endangered. 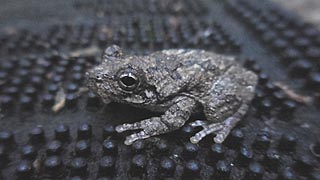 Treefrog, Cope's Gray (Hyla chrysoscelis)
Gray or green in color, but has color-changing ability. Light spot beneath eye. Yellow with black marking on inner thigh. Appearance is the same as the Gray Treefrog, but they have a different call. 1.3 to 2 inches in length. 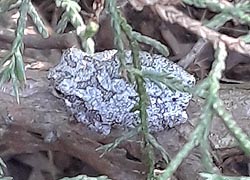 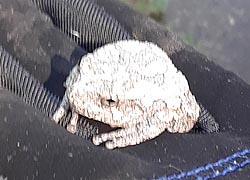 Treefrog, Gray (Hyla versicolor)
Gray or green in color, but has color-changing ability. Light spot beneath eye. Yellow with black marking on inner thigh. Appearance is the same as the Cope's Gray Treefrog, but they have a different call. 1.3 to 2 inches in length.

Treefrog, Green (Hyla cinerea)
Bright green in color, but can also be dull green, yellow or gray. White or yellow stripe separates back from sides. 1.3 to 2.3 inches in length.