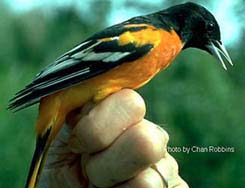 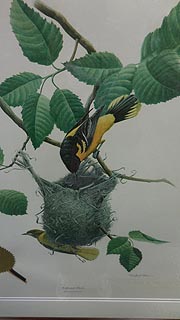 The female oriole's feathers are brownish-olive and dull orange, but the male's plumage is black and golden orange not unlike colors in the Calvert shield. This similarity led to its early association with the name of the Maryland proprietor. In 1698, "Baltemore Birds" were among the "Beasts of Curiosity" ordered sent from Maryland to grace the royal gardens (Archives of Maryland 23: 455-56). In 1894, Baltimore's major league baseball team was named after the bird.

Typically, the Baltimore Oriole in the spring migrates north from Mexico and South America to the United States, and returns south for the winter. In the spring, the Oriole weaves bag-shaped hanging nests often found on shade trees in small towns here and in the Midwest. Orioles feed on insects, fruit, and nectar, preferring ripe, dark-colored fruit, such as red cherries and purple grapes.

Maryland made special provisions to protect the Baltimore Oriole in 1882 (Chapter 154, Acts of 1882). Since passage of the Migratory Bird Treaty Act of 1918, the Baltimore Oriole is protected by federal law covering all migratory bird species, and, since 1975, by the State's Nongame and Endangered Species Conservation Act (Chapter 27, Acts of 1975).

Despite its special status, since 1966 (and more rapidly after 1980) the number of Baltimore Orioles has been declining. The loss is attributed to the decimation of elm trees, where the Oriole loved to nest, by Dutch elm disease, the further destruction of breeding habitat and tropical winter habitat, and toxic pesticides ingested by the insects which constitute the Oriole's main diet.