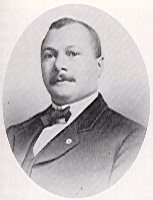 Harry Sythe Cummings, as Baltimore's first black city councilman and arguably the most influential African-American in the city for two and a half decades, placed himself in a position wide open to public scrutiny. Though Cummings had to tread gingerly on untested ground to avoid endangering his pioneering position, he nevertheless managed to enact legislation that benefitted the lives of those he represented. The News summed up one view of Cummings: "Though never lukewarm in the cause of his own people, he knew instinctively how to conduct himself in a Southern city." [1] The Afro-American took a more jaundiced view of Cummings's ambassadorial qualities: ". . . it must be said in all fairness that he is one colored man whose political activities did not arouse the prejudices of the Southern white element." [2] But even the newspaper that chided Cummings on occasion recognized him as a "leader among the colored people of Maryland." [3]