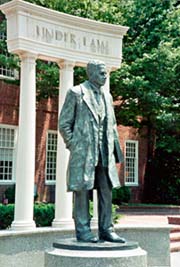 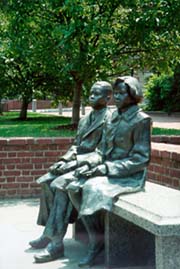 A memorial statue was erected in 1996 by the State of Maryland to honor her native son, Thurgood Marshall (1908-1993). Justice Marshall served on the U.S. Supreme Court from 1967 to 1991. In 1954, as chief counsel to the National Association for the Advancement of Colored People, he argued against school segregation before the U.S. Supreme Court in the landmark case of Brown v. Board of Education of Topeka. 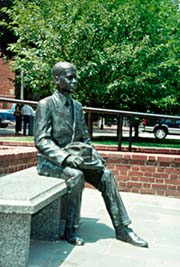 The Governor's Commission on the Thurgood Marshall Memorial Statue was established by the Governor in 1994 (Executive Order 01.01.1994.13). The Commission conducted a national design competition and, in March 1995, selected Maryland sculptor Antonio T. Mendez to create the work. Unveiled in October 1996, the statue is situated on Lawyers' Mall near the State House in Annapolis.

With the installation of the Thurgood Marshall Memorial, the Commission's duties were completed in 1996.

The Thurgood Marshall Memorial is part of the collection of the Commission on Artistic Property, which is responsible for the long-term care and maintenance of the Memorial.