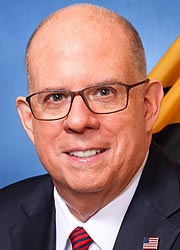 Governor Lawrence J. Hogan, Jr., is a lifelong Marylander who loves his state. Born in 1956 and raised in Landover, Prince George’s County, his interest in politics and governing began at an early age, when his father, Lawrence J. Hogan, Sr., was elected to the U.S. Congress for Maryland’s 5th district. As a young man, Governor Hogan worked on his father’s campaigns, at first stuffing envelopes and knocking on doors, and eventually helping to manage them.

In 1974, young Larry Hogan learned an invaluable life lesson, one that continues to serve him to this day. His father, Congressman Larry Hogan, Sr., was a member of the House Judiciary Committee investigating the Watergate scandal during the Nixon administration. The entire world was watching. Despite personal considerations, Congressman Hogan cast aside party politics and became the first Republican to vote for President Nixon’s impeachment, and the only Republican to vote for all three articles of impeachment. Governor Hogan says he learned more about integrity from his father in that single moment than most people learn in a lifetime.

Governor Hogan attended Florida State University, earning a Bachelors Degree in Government. During this time he also worked in the Tallahassee State House. In 1972, Congressman Hogan became County Executive Hogan of Prince George’s County and at the age of 22, Governor Hogan went to work in his father’s administration, learning firsthand the importance of bipartisan cooperation and working across party lines for the greater good. The Governor cites his father as his greatest influence and biggest role model.

After his father’s term as County Executive, Governor Hogan left public service for the private sector. He entered the real estate industry and founded Hogan Companies in 1985. The business quickly became the leading land development firm in the state of Maryland, focusing on economic development and bringing hundreds of businesses and thousands of jobs to the state.

Mr. Hogan took leave from his business and once again joined the public sector in 2003, when his friend, Governor Bob Ehrlich, asked him to join his administration as Secretary of Appointments. When the Ehrlich administration concluded in 2007, Mr. Hogan went back to the private sector, believing he might never again serve the people of his state in a public position.

In 2011, Mr. Hogan founded the grassroots organization Change Maryland. What began as an idea between a few friends quickly grew into the largest grassroots organization in State history and the leading voice of support for tax relief, responsible budgeting, and economic growth. As the Chair of Change Maryland, Larry Hogan traveled across the State listening to the concerns of Marylanders from all walks of life. In 2014, he announced his campaign for governor. That same year, Governor Hogan was elected on a message of fiscal restraint in order to grow the private sector; put people back to work; and turn the economy around.

The Hogan administration marks the beginning of a new era in Annapolis – one that is inclusive, bipartisan, efficient, and always puts the needs of Maryland families and businesses first. Its main focus is to get the State’s budget under control, eliminate waste and abuse in State government, provide tax relief to struggling Marylanders, and bring jobs and businesses back to the State.

The Governor’s success and experience in the private sector, combined with his experience in government, give him a clear understanding of how government policy can have an impact on business growth and job creation.

In 2014, Governor Hogan became the first Maryland governor in over 100 years to be elected from Anne Arundel County, and in 2018, the first Republican governor to win a second term in Maryland since 1954. He and his wife, Yumi – an artist, teacher, and first-generation Korean-American – have three daughters, Julie, Jaymi, and Kim.