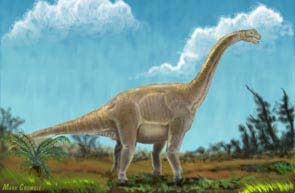 In 1998, the Astrodon johnstoni was named the State dinosaur of Maryland (Chapter 404, Acts of 1998; Code General Provisions Article, sec. 7-322). The Astrodon lived in Maryland during the Early Cretaceous period, from 95 to 130 million years ago.

Astrodon means "star tooth" and derives from the fossils found in 1858 by Philip Tyson, then Maryland's State Agricultural Chemist. His discovery of two teeth in the Arundel Clay near Muirkirk in Prince George's County was one of the earliest dinosaur finds in this country and the first in Maryland. Tyson gave the teeth to a local doctor and dentist Christopher Johnston, who sliced a tooth into cross sections, discovering a star pattern. In his 1859 article for the American Journal of Dental Science, Dr. Johnston called the species Astrodon.

Astrodons were sauropods (lizard-foot) of the Saurischian order (lizard-hip). These large dinosaurs weighed up to 20 tons. They had small heads, long necks, and long tails. Strong, solid legs supported their rounded bodies. Adult Astrodons could be 50 to 60 feet long, and more than 30 feet tall. They were herbivorous, probably feeding on conifers, ferns, and other plants.