With his Union Baptist house in order, Harvey Johnson turned his attention and leadership to the secular world. By the early 1880s, Johnson began to lend his reputation, his pulpit, and his finances to a burgeoning "race" effort among black leaders nationally. As Reconstruction progress and civil right protections began to surrender to the wave of "redemption" sweeping the 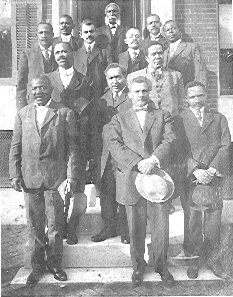 South, blacks took their cause to the courts. Despite setbacks and unfavorable interpretations of the Fourteenth Amendment, blacks in Baltimore saw the judiciary as the ultimate insurer of rights. On June 22, 1885, Rev. Dr. Harvey Johnson called five of his closest Baptist colleagues to his home at 775 W. Lexington St. In attendance were the reverends J.C. Allen of First Baptist Church, P.H.A. Braxton of Calvary Baptist, William M. Alexander of Sharon Baptist, and W.C. Lawson of Macedonia Baptist Church. At this meeting, the discussion focused on the erosion of Reconstruction Era progress and what they as Baptists, as pastors, and as black men could do about the problem. The result of this meeting of minds was the formation of a civil rights organization, the Mutual United Brotherhood of Liberty of the United States of America (MUBL). The MUBL pledged themselves, "to use all legal means within our power to procure and maintain our rights as citizens of this our common country." The organization established offices at 2 E. Saratoga St. In mid-October 1885, the MUBL held a three-day conference on the status of black civil rights. Frederick Douglass addressed the conference. Immediately prior to the convening of this conference, probably due to no small coincidence, Johnson and the MUBL successfully engineered the admittance of Everett J. Waring to the Maryland Bar, concluding a fight begun by others in the 1870s. With the bar door opened, Johnson, the MUBL, and the small but growing coterie of black lawyers began an attack on inequalities. Black exclusion from jury boxes, the absence of black teachers from the city's public schools, the deteriorated condition of black public schools, and the infamous bastardy codes effecting black women, were the more visible of the fights taken on by the MUBL legal team.

In line with the philosophy of self-determination and separatism which saw him push toward the founding of the Colored Baptist Convention of Maryland (1898), Harvey Johnson developed a plan for race progress known as the "Texas Purchase Movement." The result of confidence, pride, and frustration, Johnson called for the separation of the races of the U.S. with blacks removing themselves to an independent state, formerly Texas. Clearly these approaches to the problem of race discrimination moved away from that designated by the "old guard" of the post-Civl War Era.