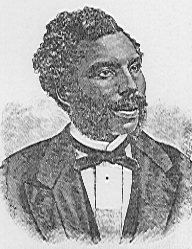 Harvey Johnson was born in Fauquier County, Virginia on August 4, 1843 to Thomas and Harriett Johnson, enslaved persons on a local plantation. When freedom came during the course of the U.S. Civil War (1861 - 1865), the Johnson's, like other freedpeople, migrated to Alexandria, Virginia. At one time part of the District of Columbia, Alexandria was an important port in the Potomac River/Chesapeake Bay trade system. The city's black population grew significantly following the war, and established for itself a number of institutions. The Alfred Street Baptist Church, one of the more impressive of the black Alexandrian institutions, attracted the newly arrived Johnsons.

Johnson received his "calling" to preach, and enrolled at Washington, D.C.'s Wayland Theological Seminary in 1868. Four years later he was graduated, with honors, and began of brief period of stints working in the rural countryside of Maryland and Virginia under the auspices of the Home Mission Society. During that same year, 1872, Baltimore's Union Baptist Church sought a replacement for its late pastor Rev. William P. Thompson who died unexpectedly at the age of thirty-two. Union Baptist sent for young Rev. Johnson in November 1872.

On April 17, 1877, Harvey Johnson married Amelia E. Hall, an Afro-Canadian born in Montreal (1858). At the age of sixteen, Amelia had accompanied her parents, both of whom were native Marylanders, when the family relocated to Baltimore in 1874.

A few years after arriving in the city, Amelia met and married Rev. Harvey Johnson, then the young, fifth-year pastor at Union Baptist Church. Their marriage yielded three children, Harvey, Jr (born?), a daughter, Jessie E. (1878), and a son, Prentiss (1883). Outside of her responsibility to family, Amelia Johnson made a name for herself in the juvenille and religious literature circles. Beginning in 1887, she began to publish a monthly literary magazine, The Joy, as an outlet for black writers, especially females, and an inspirational resource for black youth. Filled with short-stories, poetry, and literary items of interest, The Joy was well received and praised. Amelia Johnson also published work in newspapers, both secular and church-affilated. In fact, during the early 1890s, she penned a regular column, "Children's Corner," in the Baltimore Sower and Reaper. During that same period, Amelia Johnson had a full manuscript published by the American Baptist Publishing Society, one of the largest publishers of the time. Clarence and Corinne; or, God's Way, a novel for juveniles, like Amelia Johnson's other works, was well received. According her son, Harvey Johnson, Jr., several years after the fact, Amelia was her husband's, "best friend, and his chief comfort, his guide in all his business matters...I still consider [their] union a perfect one." Amelia E. Johnson died during spring 1922.

Rev. Dr. Harvey Johnson served Union Baptist Church faithfully for more than fifty years, until his death in January 1923. As aptly described in an obituary appearing in the Baltimore Afro American, Johnson's death marked the end of an era in leadership.