Governor Harry R. Hughes and the Hughes Collection at the Maryland State Archives 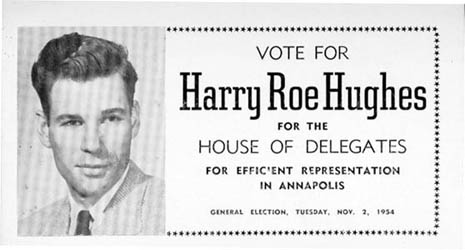 Harry Hughes was born November 13, 1926 in Easton, Maryland but spent the vast majority of his formative years in Denton.  At the age of 17, he enlisted in the U.S. Navy Air Corps and completed a year and a half tour of duty.  After returning from World War II, Hughes entered the University of Maryland where he received his B.S. degree in 1949.  Hughes briefly tried his hand as a pitcher, but his stint with the Yankees farm team ended quickly (Later in life, Hughes remarked that only two things prevented him from becoming a great pitcher: his fastball and his curveball).  His sports career having come to an early end, Hughes entered law school, receiving his J.D. from George Washington University in 1952.  He then practiced law in Denton until 1954, when he was elected to the House of Delegates.

After serving one term in the House of Delegates, Hughes successfully ran for State Senate in 1958. Hughes decided to run for the Eastern Shore Congressional spot in 1964.  After winning a racially charged Democratic primary, Hughes was not able to unseat incumbent Republican Rogers Morton.  His first political loss did not lower Hughes' standing in his colleague's eyes, however, as his Democratic colleagues made him the majority leader in the State Senate in 1965 and state party chairman from 1969-1970.  In 1971, Hughes became the state's first Secretary of Transportation. Under his leadership, Maryland codified its transportation system, bringing various quasi-independent agencies under one roof.  Hughes' department was also responsible for acquiring  Friendship Airport,  which was subsequently transformed into Baltimore-Washington International, and for establishing the subway system in Baltimore.  Despite his accomplishments, Hughes resigned his position in May of 1977, claiming the Board of Public Works was playing favorites in its contractual awards.

Hughes left politics and returned to practicing law, this time in Baltimore city.  However, this change was temporary, as Hughes announced he would be running for Governor in September of  1977.  Viewed throughout the campaign as an underdog, Hughes steadily built support as an outsider, portraying himself as untainted by the recent spate of political scandals that had claimed the careers of politicians like Spiro Agnew and Marvin Mandel.  This outsider status resulted in Hughes' shocking primary victory over the big name and ultra-insider ticket of acting Governor Blair Lee and President of the Senate, Steny Hoyer.  Riding the wave of his upset victory, Hughes defeated his general election opponent, J. Glenn Beall, in what was the largest margin of victory in Maryland gubernatorial history.  During his first term, Hughes concentrated his efforts in several areas.He continued his work on transportation issues, heading the National Governor's Association's Transportation, Commerce and Technology committee, and enacting tougher drunk driving laws.  He also pushed for a variety of tax reforms, created a committee to examine racially and ethnically motivated violence, and was instrumental in the passage of programs designed to help the Bay and the state's environment.

However Hughes and his Lieutenant Governor, Samuel Bogley, began to publicly disagree on issues,and in 1982, Bogley ran on State Senator Harry McGuirk's ticket.  After a contentious primary campaign, Hughes and his new running mate, Joseph Curran, defeated the McGuirk/Bogley slate and others to win the Democratic nomination.  Hughes was then returned to office by the people of Maryland, as he handily beat Robert Pascal in the General Election.  During his second term, Hughes continued to emphasize many of the same issues he had taken up during his first term.  He pushed for more environmental legislation, specifically for laws designed to help the Bay, and continued to enact legislation designed to secure Maryland's financial health. Also, the task force on racial and ethnic violence he had established became formalized into a national institute.   These accomplishments aside, one of the most memorable events during Hughes' term may have been the year long party to celebrate Maryland's 350th Anniversary.   After almost four years of planning, Maryland celebrated its birth with lectures, festivals, ceremonies and even a visit from the Duke and Duchess of Kent.

With his second term coming to an end and Maryland law preventing a third term, Hughes decided to launch a campaign for U.S. Senate in 1986. However, his campaign was hampered by the Savings and Loan failures which had hit the United States (and Maryland)  in the mid-1980's, and Hughes lost to Barbara Mikulski.  Hughes has remained an active public servant since  1986, as he has been a member of the University System of Maryland Board of Regents,  President of the Eastern Shore Land Conservancy, a trustee of  the Chesapeake Bay Trust and head of the Maryland Democratic Party.  Privately, Hughes heads the Baltimore office of Patton, Boggs, L.L.P. 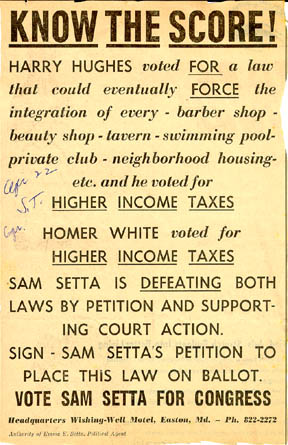 The Hughes collection has been divided up into 15 different categories, each varying  in terms of its size and scope.  Several of these series are quite extensive and shed light on Hughes, Maryland, and politics in general.  Physically, the largest category is the Government House section, consisting of fifty-five CSEs. The Government House series dealt with the following topics: the reinstallation of Government House by Mrs. Hughes in conjunction with the Maryland Historical Society; Mrs. Hughes official schedule and appearances as first lady; calender of Government House events, including such highlights as Annual Legislative Dinners, Easter Egg Hunts for Blind Children, and Holiday Open Houses, and topic files with research on various issues and legislation. The series also included a large number of photos covering the various stages of the reinstallation process and Government House social events.

Perhaps the series richest in political content is the campaign materials section.  This series contains a considerable amount of information on the public side of politics - advertisements, newspaper clippings, campaign paraphernalia, etc.  However, it also includes the materials many people never get to see: strategy memos, prototypes for advertising, letters of support, drafts of speeches, information files on various issues, etc.  Of particular interest are the materials relating to Hughes' 1964 run for Congress. The materials on this election highlight two of the themes that were so important to 1960's America: the question of race, especially the 1964 Civil Rights Bill,  and the expanding role of the Federal government.  Hughes kept several information files on the Civil Rights Bill and various Great Society programs such as the Housing and Community Development Bill, the Food Stamp Act, and Medicare.  Moreover, the tenor of the campaign itself - the speeches, press releases, advertisements, etc. - reflect the growing race-consciousness of the Eastern Shore of  Maryland in 1964. This series also covers the gubernatorial campaigns of 1978 and 1982, the campaign for senate in 1986, and the campaigns for the House of Delegates and State Senate. 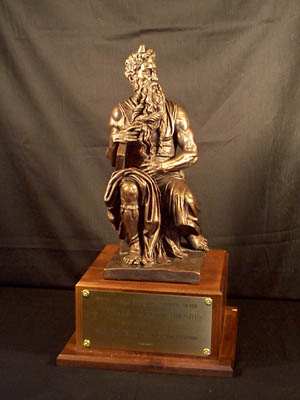 While part of the importance of the campaign materials section derives from its variety, a pair of one dimensional sections may be just as valuable.  Both the newspaper clippings and speeches sections provide their own unique look at being a Governor.   From reaction to Hughes' resignation as Secretary of Transportation, to his surprise win in September, to his landslide triumph in November, the newspaper clippings cover in immense detail Hughes' dramatic rise to power.  The speeches section, on the other hand, covers Hughes' entire governorship (1978-1987) and contains hundreds of addresses and talks he gave around the state.  It provides an important window into the busy schedule and unglamorous political activities which are expected of a Governor. Other series in the Hughes Collection include material on Hughes' role as the first Secretary of Transportation, various letters and reports from Hughes' days as a legislator, video and audio tapes of campaign speeches and advertisements, photographs, reports and publications, and inaugural information.

Of particular note is the series cataloging the extensive memorabilia memorabilia collection which provides a sometimes visually spectacular way of learning about Harry Hughes' accomplishments and political support. For example, this statue, the Dr. Herman Seidel Humanitarian Award, was given to Governor Hughes in September of 1983 by the Israel Histadrut Council of Greater Baltimore. It stands approximately two feet high. The items are mostly from Hughes' two terms as governor (though there are some things from his time as Secretary of Transportation) and they tend to fall into four categories: gifts from constituents, businesses, dignitaries and civic organizations. Categorizing the items themselves is much more difficult, however, as they run the gamut from the ordinary (certificates, plaques and acrylic presentation pieces) to the extraordinary (decorated bricks, paintings, belt buckles, and a samurai helmet).